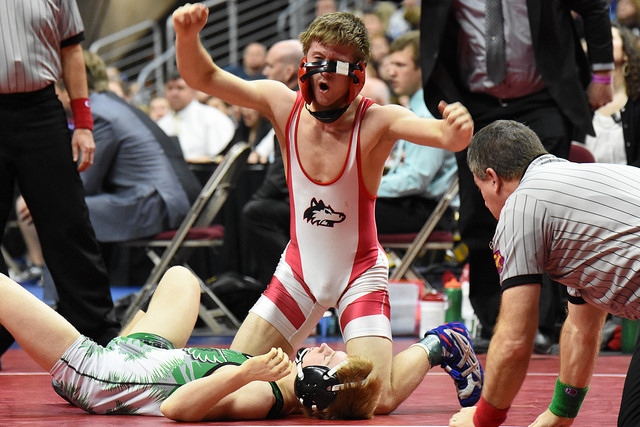 Bryce West: It felt great to be back on top of the podium again for the second year in a row.

You earned a fall in the finals, why is that you have been able to just be so dominant at the state tournament?

I have been so dominant at the sate tournament from all the hard work I have put in through the off season and during the regular season. Also by having my brother (Drew) and coaches pushing me in practice everyday.

How did you celebrate your individual championship?

I celebrated with my family that came up to support my brother and I.

The first thing I wanted to eat was ice cream.

Who is your favorite wrestler to watch right now?

My favorite wrestler to watch right now is Jordan Burroughs.

My favorite part at state was winning state because its a great feeling winning in front of all the people at the tournament.

What are your wrestling plans for the summer?

My plans for this summer is to win Fargo and UWW Juniors.

I have a couple of colleges interested in me at this time. Nebraska, North Dakota state, Air Force, and Virginia Tech