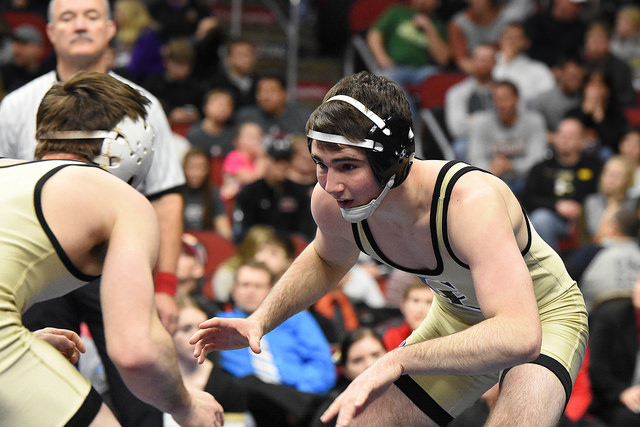 Fresh off earning his second state title, Clear Lake’s Ryan Lesiure caught up with us to talk about winning his second title and what the future holds for him.

IA Wrestle: How does it feel to be a two-time Iowa high school state champion?

Ryan Leisure: It feels really good being a 2 time state champ. Knowing that the hours of hard work are paying dividends is a great feeling.

You wrestled a tight finals match with Wyatt Thompson, but then out of nowhere in overtime you hit a nasty spladle to win. Was that a move you were saving or did the opportunity just present itself?

Yeah, I was having trouble getting to my offense in that match. They really had me game planned pretty well, but they forgot about my spladle which I hit on a Creston kid my freshman year at state. In my finals match I really didn’t plan on hitting it, I sort of just hit it on instinct and I actually surprised myself when I hit it.

How did you celebrate the second title?

After I got away from everyone I just hung out with friends and family. It was a really relaxing night.

What food/drink were you looking forward to eating with the season finally over?

I really missed my ice cream! (Laughs) That’s my favorite food in the world! I could eat it for every meal.

What will be your wrestling plans for you this summer?

This summer I plan on wrestling freestyle and Greco. Hopefully I will be an All-American in both styles at Fargo.

When we last spoke you listed UNI and ISU as your two schools, have any other schools entered the mix or are they still the front runner?

Nothing has changed as of recruiting. Maybe Iowa State as the leader.