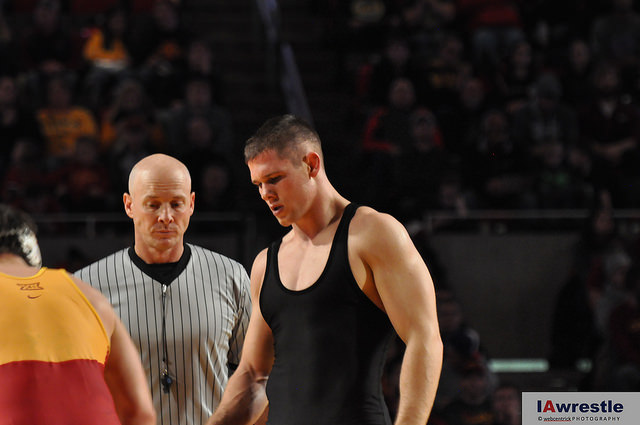 This Friday night the Iowa Hawkeyes will welcome in the Indiana Hooisers for a dual in Carver-Hawkeye Arena that will not only wrap up the Big Ten dual season for Iowa, but will also be senior night for as many as four starters in the Hawkeye lineup. This will be a big dual for the Hawkeyes as a win will guarantee them at least a tie for first place finish in the Big Ten. The other undefeated Big Ten school, Penn State will wrestle Ohio State, which means Hawk fans may be rooting for a Buckeye victory to leave Iowa alone at the top of the leader board.

We will start this week’s preview with the seniors who will most likely be in the starting lineup for the Hawkeyes. First out of the gate will be Brody Grothus (pictured left) at 141, who has recently started to split time in the lineup at this spot with his former high school teammate Topher Carton. Grothus enters this competition with a 46-25 record (7-6 in Carver), but is only 2-3 this year. Grothus had spent the previous three years as a varsity member at 149 pounds for Iowa, but with Brandon Sorensen’s emergence at that weight, he opted to drop to 141 this season. Brands has yet to officially announce who will be his post seasons starter for this weight, but Hawkeye fans remain bullish on Grothus’s potential at this weight.

Grothus will match up with Cole Weaver, a wrestler he beat by technical fall when both were at 149 pounds.

Up next will be 157 pound starter Edwin Cooper Jr, who has surprised many Iowa fans with his solid season, breaking into the top 20 rankings before the Midlands break. Cooper has put together a 24-11 record in just two seasons at Iowa after winning a JUCO title for Iowa Central and finishing runner-up for Upper Iowa as a sophomore. He brings a 6-2 home record into this weekend against Jake Danishek.

All signs seem to pointing that Patrick Rhoads may be the guy Brands turns to for the post season at 165 pounds, and he certainly looked good in his whopping over Minnesota last weekend. Rhoads has been a unique situation for Iowa, cutting all the way down to 149 a few years ago in a wrestle off, but spending a bulk of his career split between 157 and 165 pounds. He enters Friday with a 33-17 record, and is now 2-2 at home. Rhoads will face Bryce Martin.

The remaining senior is the two-time NCAA All-American Nathan Burak, who has created plenty of buzz in his career in a Hawkeye singlet, mainly with a majority of his first three seasons being constantly under scrutiny of whether he would redshirt or not. Burak is the only wrestler in Tom Brands coaching history to never use a redshirt and with an 80-33 record and two podium finishes to date I would say he has fared awfully well for himself. He enters Friday looking for Carver win number 20 against Jake Sasengale.

This dual should be fairly heavy in the Hawkeyes favor with Indiana only having two wrestlers on InterMat’s top 20 rankings. One of the wrestlers will have the misfortune of wrestling Thomas Gilman, who is currently averaging at least a technical fall in all of his dual appearances on the season. Elijah Oliver certainly looks like he has talent, but Gilman will likely overwhelm like he has all season.

The dual’s biggest match to watch will come at 174 pounds where #10 Alex Meyer will face off with #11 Nate Jackson, which in all honesty could put Meyer in a position to receive the Big Ten’s top seed for the post season. Earlier in the year Jackson became the first and only wrestler to defeat Penn State wrestler Bo Nickal in their dual, which means a win by Meyer caps off an undefeated Big Ten dual season.

Another interesting match to watch will be the heavyweight bout where Sam Stoll will face off with Garrett Goldman. Hawkeye fans may remember that Garrett’s father Duane, who also coaches Indiana, was a four-time Big Ten Champion as a Hawkeye, and remains near the top of several Hawkeye records.

Two additional seniors will be honored on Friday night, and they are 141 pound wrestler Jake Kadel, and 197 backup Kris Klapprodt. Kadel put together a 28-20 record as a Hawkeyes winning his first and only dual start this season in the Iowa City Duals. Klapprodt has been a do it all type of wrestler for Iowa, starting out as a 174 pound wrestler and working his way into a 197 pounder (he even recorded a start at heavyweight last season). Klapprodt finishes with a 54-16 record and was 4-3 inside Carver.

One thought on “Iowa to host Indiana on senior night”