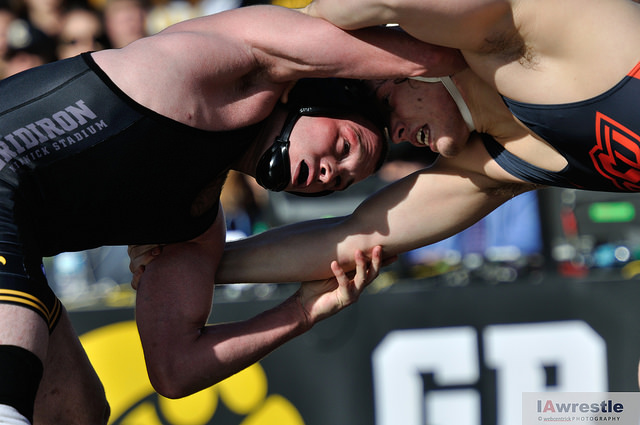 As always comment below article if you have any questions during the dual. Easiest way to get my attention will be to tweet to me @RossIAWrestle.

1st: Double unders by Brody, looking bearhug, Cash trying to slip into a headlock, they go out of bounds. I missed who took the shot, but Cash had Brody in a bit of trouble, Grothus able to scramble out of it and they go out. Grothus scores on a go behind and is now riding. He looks a little high and Cash able to capitalize and get out for the escape. Headlock for Grothus and he gets the fall.

1st: Sorensen looking for an opening in the early going. Not able to do much out o his collar tie. Reaches for a leg, but Blanton fights it off. 1:30 to go. Both guys circling in the center. Sorensen tries another outside single, not a full committed shot however. Period ends scoreless.

2nd: Blanton takes down. Sorensen starts out with his spiral ride pinning Blanton’s head to the mat. Blanton out ot his feet, Sorensen returns him going out of bounds by grabbing an ankle and tripping. Blanton to his feet, Sorensen goes for a big return and Blanton slips out, :58 RT for Sorensen. Sorensen drops to a head inside single and is able to finish with :12 to go in the period, he leads 2-1.

1st: Cooper in right away on a shot and finishes quickly, crowd shows their applause for the quick strike. Danishek gets to one knee, but Cooper able to bring him back down to his base. Cooper with over one minute riding time with just under 2:00 to go. Danishek keeps coming up, Cooper keeps knocking him, down, now Danishek comes up and Cooper trips to Danishek’s back for 4 point near fall and a 6-0 1st period lead. Now Cooper out front looking for a cow catcher, but doesn’t get it.

2nd: Start on their feet and Cooper scores lightening quick to make it 8-0, racking up over 3:00 RT. Cooper just putting in a lot of work riding Danishek. Not much action with :40 to go. Cooper finishes the rideout.

3rd: Another neutral start, another Cooper takedown and 10-0 lead for Cooper. Now he cuts Danishek to make it 10-1. Shot by Danishek, Cooper digs an underhook and works back to his feet. Single by Cooper with :15 and he finishes to make it 12-1.

1st: No score in the first 1:30, not much offense to speak of. Martin warned for stalling backing out of bounds, Martin gets in on a shot, but Rhoads fights for a stalemate. Scoreless first.

2nd: Martin starts down gets to his feet and is out in :04. Rhoads now trails 1-0. Rhoads in on a single with 1:05 to go, Martin tries to donkey kick out of it, but Rhoads follows and catches the other ankle for a takedown with :51 to go. Martin to his feet and Rhoads cuts him, 2-2 now. Martin takes a shot, but Rhoads fights it off.

3rd: Rhoads starts neutral. Rhoads looked like he was going high crotch, but doesn’t commit to his shot. Both on their feet with 1:00 to go. Tied 2-2, blood time with :22 to go. Rhoads takes a late shot and ref awards the two after Rhoads chases Martin around for the ankle.

Casey’s giveaway: What is your favorite memory of a Hawkeye in this year’s senior class?

1st: Jackson hits a single right off the whistle, Meyer trying to counter out, but Jackson able to lace the legs and finish for a takedown. Meyer able to work out after :20, Jackson in right away for another takedown, 4-1 Jackson lead. Meyer out to his feet again, trails 4-2 Jackson with :51 RT. Another Jackson takedown with just under a minute to go. 6-1 lead for Jackson. Meyer up to his feet, Jackson takes him back to his knees, Meyer doing a good job moving underneath, gets to his feet, 6-3 after the escape. Period ends.

2nd: Meyer starts down, works up to his feet and is out, 6-4 for Jackson. Meyer in on a shot, reshot by Meyer, looks like he is going to have Meyer in trouble, but Meyer able to come around, trying to get a go behind. Takedown Meyer. Jackson to his feet, Meyer cuts him and covers. it’s 6-6 Meyer got the RT under 1:00 with :16 left. Meyer finishes the rideout.

3rd: Jackson starts down, Meyer cuts him pretty quick. Jackson in on a single, Meyer able to fight out. Meyer trails 7-6. Two on one arm tie to a single, Meyer picks Jackson’s leg up trying to trip for the finish, Jackson falls back and Meyer covers for the takeodnw. Now Meyer riding TOUGH on Jackkson. :30 to go. Meyer has an arm bar, Jackson bellied out he wins. Crowd goes nuts.

1st: Sammy with a single, brings it to his feet, tree tops for a takedown. Brooks cuts him. Goes double under and looking for a throw, gets the takedown but that’s it as they go out. Brooks up over 1:00 RT with over a minute to go. Brooks picks up a big mat return then cuts Irick. Brooks with a takedown and cuts him. :33 to go, Brooks scores again. He leads 8-3 now. Finishes the rideout.

2nd: Irick starts down, Brooks bellies him out, now cuts him. Brooks looking throw, switches to a leg attack for two more as they go out. 10-4 lead. Brooks cuts on the restart. Irick warned for stalling, Brooks able to score another big takedown, 12-5 with :50 to go. Brooks cuts, in on another leg attack, scores with :24 to go, 14-6 lead.

3rd: Brooks starts down, he’s up and out, 15-6 with 3:09 RT. Brooks tries a shot, switches to a bear hug, Irick tries to back out and Brooks goes behind for another score, 17-6. Brooks trying to work out front to pull out an arm bar, Irick gets the escape, Brooks in right away ruled potentially dangerous. Off the restart Brooks goes double underhook, Irick hit for stalling for backing away. One for stall, trip for Brooks is two more. Brooks cuts with :20 to go. Gets a go behind.

1st: Burak working an underhook early, goes to an attack on Masengale’s lead left leg and gets a takedown. Burak riding tough now, has Masengale bellied out on the mat, they go out of bounds. 1:24 to go. Masengale gets out for an escape, Burak able to pick up two more, Masengale escape, another takedown really quick by Burak, Burak cuts again on the edge. 6-3 lead for Burak. Another takedown for Burak off a two on one arm tie. Closes the period up 8-3.

2nd: Burak starts down, goes to a sitout position to his feet and is out, in :12. Ref calls for a brief timeout for Masengale. Burak back to working two on one ties and is in on another score to Masengale’s back, picks up two near fall too. 13-3 lead. Escape Masengale, he is also warned for stalling. Burak in for another score. Gives Masengale the release, Burak in for another score he’s up 17-5. Escape Masengale, high crotch Burak, now Burak able to turn for four back points, looking for a fall. Time runs out.

1st: Someone yells “stalling” off the whistle. Shot by Miller, Stoll looking to extend and goes behind for a takedown. Stoll working hard on top and Miller warned for stalling. Another stall warning on Miller, 3-0 lead for Stoll. Stoll got a one count for Near fall at the end. Stoll finishes the rideout with 2:20 RT.

2nd: Stoll starts down, gets a reversal and looks like he may have Miller in trouble, gets four near fall count there is the fall.

1st: Gilman out working a front headlock with Oliver. They go out. On a restart, Oliver takes a shot on GIlman, Gilman fights it with ease. Now Gilman back in the front headlock looking for a go behind, gets a single leg off of it and finishes for a takedown. Gilman riding tough on top, puts in a half, Oliver goes to his feet, Gilman brings him down. Oliver tries coming up to his feet, Gilman grabs an ankle and trips for the return. Rideout.

2nd: Gilman starts down, able to hit a roll and wind up on top for a reversal. Oliver to his feet for an escape, 4-1 Gilman lead. Gilman going bear hug, both guys looking upperbody, but they back out. Oliver hit for stalling for backing out. Gilman gets another takedown with :40 to go. Finishes the rideout, now has over 2:00 and a 6-1 lead.

3rd: Oliver starts down, Gilman lets him up for the escape. Gilman takes a far away shot, gets in on the leg trying to come out the back door, gets ruled potentially dangerous. I think Tom wants them to look and see if there was two, refs warn the Iowa bench. Gilman gets a takedown for two more, technical violation on Oliver, Gilman leads 9-2.Oliver gets a reversal, Gilman able to reverse himself, 11-4 Gilman lead. Gilman win.