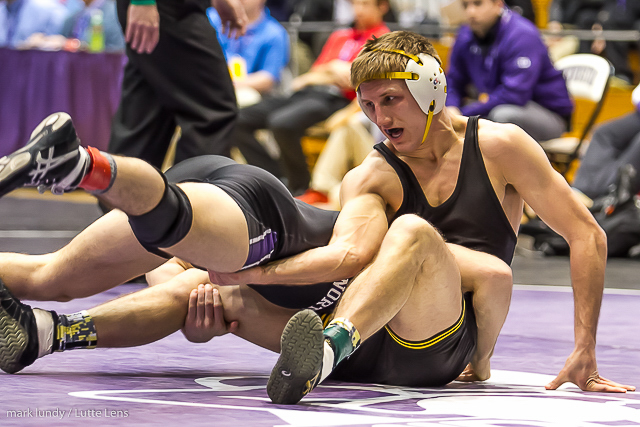 The Hawkeyes returned to Carver-Hawkeye Arena to face Purdue on Friday putting in a dominating performance by winning nine of 10 matches, including six of those by bonus. With the win Iowa improved to 12-0 in dual competition and 6-0 in the Big Ten conference. The Hawkeyes appear to be firing on all cylinders winning 28 of their last 30 matches, and saw the return of senior Brody Grothus to the starting lineup.

It was a long way back to the mat for Grothus, who last made his appearance in Carver back in 2014 against Michigan. The next season, Grothus suffered an injury at the 2014 Midlands tournament which would hold the former NCAA qualifier out competition for the reminder of the season. Later Grothus would have off-season surgery further delaying his time to the mat, but it appears that the former Davenport, IA standout is finally lineup-ready.

His 2016 debut came against Danny Sabatello, who was 2-2 at least year’s NCAAs at 133 pounds. Grothus was able to deliver a win for the Hawkeyes powered by first and third period takedowns to come out on top 6-0.

The rest of the lineup continued their trend of dominance, including three Iowa wrestlers extending their undefeated seasons. Thomas Gilman moved to 16-0 with his fourth technical fall of the season over Ben Thornton to start things off. Brandon Sorensen was able to improve to 18-0 with his 8-2 decision over Alex Griffin at 149 pounds, and Nathan Burak now has a career high 16 straight wins after his 23-7 technical fall at 197 over Drake Stein.

Also providing bonus wins for the Hawkeyes were juniors Cory Clark at 133 and Sammy Brooks at 184 pounds, who each recorded major decisions in their bouts.Sam Stoll picked up a second period fall over Tyler Kral to give him his seventh pin this season, which now leads the team.

Edwin Cooper Jr was able to record a fall of his own at 157 pounds. Cooper was able to hold Doug Welch’s shoulders to the mat in a scramble situation for the first period fall.

Rounding out the win column for Iowa was Alex Meyer, who recorded a 8-4 decision against Jacob Morrissey at 174 pounds.

Purdue was able to pick up one victory on the night where #7 ranked Chad Welch was able to defeat freshman Burke Paddock 15-4 at 165 pounds. The weight has been a struggle for Iowa this season, with Paddock and Patrick Rhoads combing to go 0-6 against the top 20 in dual competition.

The Hawkeyes will be back on the road starting Sunday, as they head to Lincoln, Nebraska to face off with the Corn Huskers for the first time since 2014.