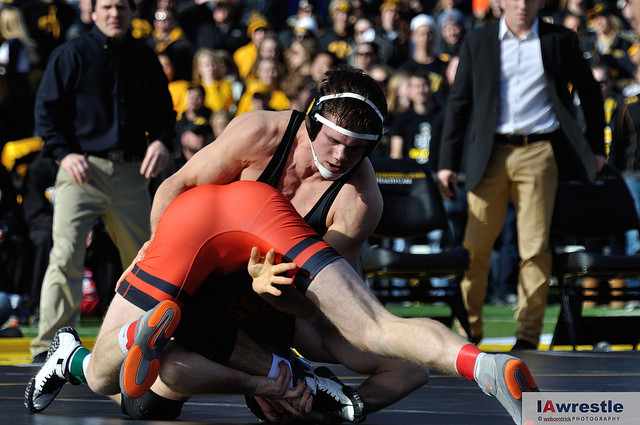 Coming off a solid victory over Purdue, the Hawkeyes will hit the road once again, heading west to face Nebraska in a top ten showdown. The Hawkeyes have improved to 12-0 on the season, and are looking for their 30th win in program history over the Corn Huskers. It’s been over two decades since Nebraska was able to get the better of Iowa in Lincoln, with the last loss coming in 1993.

This shakes out to be a great dual with a total of 18 ranked wrestlers – and eight of those being in the top ten. It’s a dual fan’s dream to see a meeting of this proportion, with both teams trying to claim the second spot in the Big Ten in next month’s National Duals.

Starting out Thomas Gilman and Tim Lambert will provide an interesting matchup, with a history that goes back to Gilman’s freshman season. Then, Gilman was battling with teammate Cory Clark for a spot in the lineup and at the time his 2-1 win over Lambert was cementing him as one of the top seeds in the Big Ten.

Two years later Gilman has emerged as one of the titans of the 125 pound weight class while Lambert is still looking to solve the NCAA All-American puzzle. These two have provided some good free-and-folkstyle matches over the years, and there could be another Sunday.

Since suffering his first loss of the season, Clark has looked sharp in the last few outings, with the big win (video) being his 7-3 victory over #7 Ryan Taylor of Wisconsin. At one point Montoya was fairly high in the rankings, but losses to Geoffrey Alexander and Emilio Saavedra have pulled him back down. His talent is deceiving to his ranking, which should give Cory a tough match.

With the return of Brody Grothus to the lineup, all eyes will be on this spot in the lineup going forward. Junior Topher Carton was having a solid season, but lacked significant wins to this point in the year. Grothus is coming off his dual season debut and looked fairly sharp, downing Danny Sabatello 6-0 on Friday.

Brandon Sorensen will attempt to continue his undefeated season in a rematch with #5 ranked Jake Sueflohn. The pair have only met once, at this year’s Midlands, and Sorensen won that match 7-4. This match is setting up to be the highlight match in the dual.

With falls in two of his last three matches, Edwin Cooper Jr is riding a mini-hot streak coming into Sunday’s meeting with #17 Tyler Berger. Like his teammate Montoya, Berger was fairly high up in InterMat’s rankings earlier in the season and should be a tough challenge for Cooper, despite the Hawkeye holding the advantage in the current rankings.

Like the 141 pound weight class 165 pounds still has two wrestlers vying for the starting spot. Both senior Patrick Rhoads and freshman Burke Paddock have traded starts throughout the entire season, with neither wrestler clearly pulling ahead. Brands has stated several times that he is still encouraged by Paddock’s potential at this weight class, and with Rhoads being in his fifth year of the program, Brands may opt to learn a little more about Paddock against Austin Wilson.

Moving into the upper-weights, Alex Meyer vs Micah Barnes provides an interesting match that fans did not get to see at the Midlands. After suffering a loss in the semifinals, Meyer rebounded with a 3-2 win to reach the third place bout. Instead of getting a match, Barnes medically forfeited and with these two close in the rankings, this will most likely be a close match.

The 149 match with Sorensen-Sueflohn is going to get a lot of attention based on it being a top five matchup, but Sammy Brooks against TJ Dudley is my pick for the highlight bout. These two wrestled a phenomenal match two seasons ago, one that Brooks won 6-4 in sudden victory and since then the two have had fairly similar careers.

The biggest difference is that Dudley made the stand in 2015, but outside of that the two have similar records and beaten similar opponents.

Nathan Burak is 2-0 against Nebraska this year defeating both Aaron Studebaker (4-2) and backup Derek White (6-1) at this year’s Midlands. Burak looks like he has had a bit of an identity change, scoring bonus points well over double the amount of his career average (60% per WrestleStat). Iowa fans are hoping Burak’s offense will follow him the rest of the way in the season through March.

That leaves Sam Stoll vs Collin Jensen, which is actually one of the better heavyweight matchups in the entire NCAA this weekend, but so far Stoll has proven to be very competent as a redshirt freshman in this weight class. Jensen is coming off getting hammered by World Champion (freestyle) Kyle Snyder 20-9 in Nebraska’s last dual against Ohio State.