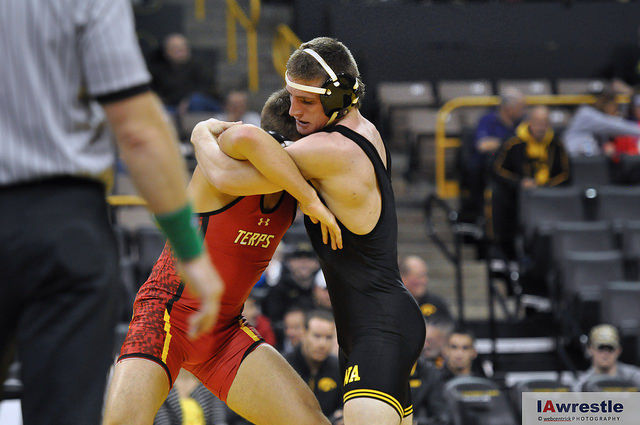 Fresh off a weekend road trip that saw Iowa combine to go 80-12 in the land of Lincoln the Hawkeyes will wrestle yet again on the road this time up in Wisconsin versus a struggling Badger squad. Wisconsin is 1-3 on the dual season with the lone victory coming against Division III’s UW-Whitewater. Wisconsin is one of three Big Ten programs still seeking their first conference dual victory.

Thomas Gilman continues to wrestle like a man possessed on the mat winning his weekend matches by technical fall and fall. His first period fall against Northwestern gave him his sixth on the season, which is tied for the team lead. Johnny Jimenez doesn’t necessarily have much to write home about and in his last two duals against top ten opponents he has lost by fall and major decision.

The feature match of the dual belongs to Cory Clark versus Ryan Taylor at 133 pounds which will feature a top ten matchup. Clark was able to rebound nicely on Sunday with a fall against Northwestern following his first loss of the season to Zane Richards of Illinois on Friday. The last time these two wrestlers faced each other was when both grapplers competed at 125 pounds as freshmen and Taylor was victories 9-5 at the Big Ten tournament.

Despite Brody Grothus taking sixth at the Pat Flanagan open in his return to the mat, the senior remains very much in the picture to contend for the starting lineup spot at 141 pounds. Topher Carton is coming off a strong win over Illinois Caleb Ervin and is starting to display consistency that Brands is looking for.

Brandon Sorensen remains undefeated on the season at 16-0 scoring bonus in ten of those matches so far (not counting the bonus points he scored in the Tsirtsis injury default Sunday). Sorensen has looked great on his feet, but the one thing (if anything) that has been a knock against him to this point this season is slow first periods. If Sorensen is able to get an early score in a match it typically leads to a strong performance.

Wisconsin junior TJ Ruschell is in the middle of a rough patch, coming in having lost three straight dual matches, two of those by bonus. Edwin Cooper Jr. on the other hand is coming off a dominant first period fall performance against Northwestern and so far his only struggles have come against ranked opponents. Cooper is 7-1 against wrestlers outside the top 20, with the lone loss being to Chance Marstellar.

Aside from Taylor, Isaac Jordan is the only other ranked wrestler that will appear in this dual for the Badgers and the junior is off to a 14-0 start for Wisconsin. Patrick Rhoads comes into the dual with a 0-6 record against ranked competition, and will have his work cut out for him if he indeed is the starter. Brands stated in his weekly press conference that freshman Burke Paddock is still very much in contention for the starting spot.

After suffering a tough loss in the Midlands semifinals, Alex Meyer has really gotten back to his offense picking up two technical falls on the road trip to improve his season record to 13-2. His opponent, Ricky Robertson, has had failed to produce against the top tier of the weight, with a 0-4 versus ranked competition and a few losses to guys outside the top 20.

The Hawkeyes will continue to be favored in the upper weights of this dual as Sammy Brooks and Nathan Burak facing opponents with a 12-11 and 3-9 record respectively. With All-American Connor Medbery taking an Olympic redshirt for the Badgers, Sam Stoll will look to repeat his 6-3 Midlands performance over Brock Horwath.

One thought on “Hawkeyes head to Wisconsin for border battle”