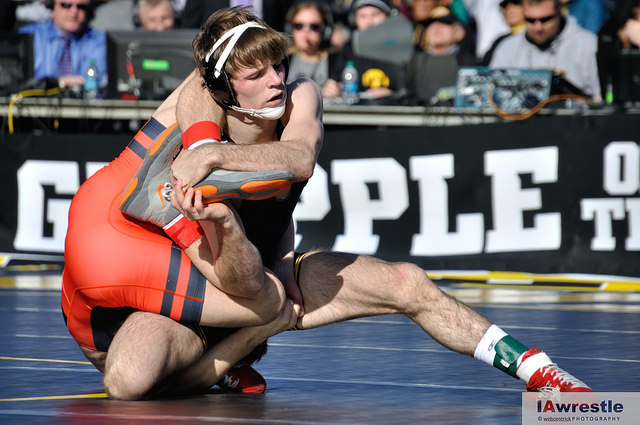 The University of Iowa continued their undefeated dual season by taking nine out of 10 matches from the Wisconsin Badgers Friday night in the Kohl Center. The 31-3 win also marked the seventh time this season the Hawkeyes have have eclipsed the 30 point mark.

Straying from traditional practices, the dual started at 197 pounds rather than 125 pounds, which meant senior Nathan Burak would lead things off for the Hawkeyes. Burak seized the opportunity and made short work of Eric Peissig, defeating him by a 20-7 major decision.

It would begin a string of seven straight wins for Iowa with freshman Sam Stoll winning 3-1 at heavyweight, and All-American Thomas Gilman put together his fourth technical fall of the season. Gilman’s win also pushed his record to a flawless 15-0 mark on the year when he defeated Johnny Jimenez 23-7.

At that point the momentum strongly favored the Hawkeyes and they were able capitalize on that picking up a big win at 133 pounds when Cory Clark was able to defeat #7 ranked Ryan Taylor 7-3. It was the only match of the dual featuring two top 10 ranked wrestlers, and one of two matches where both wrestlers were ranked.

At 141 Topher Carton was able to gut out another tough victory with a 4-2 win over Gabe Grahek. The win improved Carton’s Big Ten record to 2-1 on the season, with his lone loss being to the highly ranked Anthony Ashnault. With the lineup spot still technically up for grabs Carton is performing exactly the way a wrestler should in the middle of a lineup battle, by winning.

A pair of ranked Hawkeye middleweights recorded back-to-back decisions at 149 and 157 to put Iowa up 24-0 with three matches remaining.

It was Patrick Rhoads who got the call at 165 pounds to go up against the lone Wisconsin favorite, #3 Isaac Jordan. The reigning Big Ten champion defeated Rhoads 6-1 and in doing so claimed Wisconsin’s only win on the night.

Alex Meyer and Sammy Brooks closed things out for the Hawkeyes with a 2-0 and 14-6 win respectively, making the final score a 31-3 victory for the Hawks.

The Hawkeyes will return to their home mat this coming Friday as they host the Purdue Boilermakers in an 8:00 PM dual. It will be the first time the Hawkeyes have competed in front of their home crowd in over a month. Fans will be encouraged to show up early, as prior to the dual Team USA will hold a special wrestle off for the Women’s freestyle team. More info on that can be found on our previous release.

One thought on “Iowa routs Wisconsin 31-3”