Bettendorf’s Wagner happy to be back on the mat 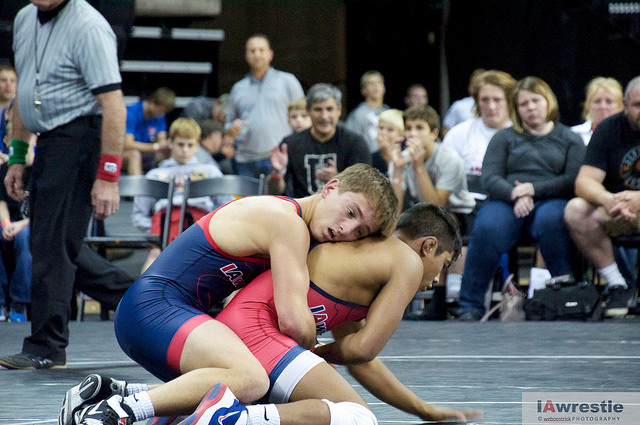 Back in December, days before his team was slated to wrestle in one of Iowa’s biggest high school tournaments, Bettendorf wrestler Jack Wagner felt a “click” in one of his knees. It was something little at first, but unfortunately hours before one of the state’s top seniors was about to take to the mat at the Keith Young tournament in Waterloo, his knee buckled.

“That Thursday in practice I felt it click and felt a little pain, but it went right back like normal.” Wagner told us of his injury earlier in the season, “I was fine Friday and I felt it clicking during warm ups Saturday. On my last sprints I went to post on it to turn and it gave out on me and it kind of buckled. I thought I blew my whole knee out, but it wasn’t as bad as I thought.”

Wagner would later find out that he suffered a bucket tear in his meniscus, which as the wrestler noted was a lot less severe as far as knee injuries go. Wagner was able to get into surgery days after he felt the tear and was almost immediately entered a rehab to get his knee ready to go.

“I had surgery that next Wednesday. I took that next day off and right away I could walk and run and stuff like that. I was lifting about two days later. Lifting heavy focusing on my upper body and getting my knee strong again.”

Wagner is a two-time state champion for the Bettendorf Bulldogs, and is in search of his third state title. The ultimate competitor, Wagner has already announced his intent to wrestle at one of college wrestling’s premier wrestling programs in the University of Iowa. So it is no surprise that Wagner felt bothered being away from his team and his sport.

“It sucked to know my teammates were competing and practicing without me. I knew that I was going to come back stronger and fresher than ever. I haven’t had a lot of breaks during the years so maybe a two week break wasn’t that bad for me and it will pay dividends in the end.”

Luckily for Bettendorf they found a capable replacement in Will Jefferson, who in his short time in the Bulldog lineup had worked his way into the top ten of the IA Wrestle 3A rankings.

“It was nice knowing someone like Will was in there for me while I was out. He’s one of my main practice partners, and he’s tough and works hard, but I definitely didn’t want it to last that long.”

The upcoming weeks will be fairly rigorous for Wagner as he could potentially face Jakob Allison of Waukee – who has taken over the #1 spot in the 3A rankings in Wagner’s absence – and Zach Price of Johnston, who is currently rated second, this weekend at Bettendorf’s Midwest Shootout. He could also end up facing #3 Harlan Steffensmeier of Fort Madison, #4 Adam Brown of Southeast Polk, #5 Brenden Baker of Cedar Rapids Jefferson, Allison, and Price all of whom will be at January 23rd’s Ed Winger Classic in Urbandale.

On what the senior is thinking about as he enters his last month and a half of high school wrestling: “Leaving my legacy and going out on top is pretty much all I think about right now. Going out with a bang. I just want to show everyone I have been working hard and have separated myself from the field.”