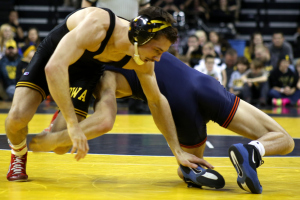 Pizza giveaway will be sometime between 141-165. You will need to comment to enter.

Casey’s Pizza Give away: comment your favorite Hawkeye and why!

1st: Edelen tries a shot right away and Gilman backs out and gets a headlock, tosses Edelen to his back, he leads 6-0. Gilman lets him up and does a slide by, another takedown, lets Edelen up. Cowcatcher Gilman and tosses Edelen to his back for another six point move. Gilman lets him up. Inside single for Glman and he gets another takedown, looks like he is going to work on top but cuts Edelen. Another Takedown for Gilman. Now Gilman is working a half nelson on top, Edelen digs it out and tries to work up to his base. Edelen warned for stalling. Gilman trying to work out front of Edelen, decides to cut him, hits a cowcatcher and there is the TF.

1st: Match starts out with both working collar ties and Clark trying to snap Richards head. Richards looked like he was going to be able to slide by Clark and almost got around for the takedown but Clark is able to keep circling and get out for no score. No Richards is in on a single, he’s got Clark’s hip on the ground and now Richards is given the takedown with Clark on his seat and Richards controlling both legs. Clark able to work off his rear and to his feet to get out, he trails, 2-1. More collar ties from neutral, but nothing much period ends.

2nd: Clark takes down. Clark to his feet quick, but doesn’t get hand control right away falls to a knee. Now back on his feet and he is out. Clark working more collar ties, he switches to a two-on-one and Richards tries to lower his level and get to Clarks leg. Richards never cleared Clarks arms so Cory able to back out. Some blood time for Richards. It’s 2-2 :18 RT for Richards and :40+ seconds left. Off the restart Clark trying to move Richards head around a bit, but both wrestlers staying in the collar tie. Period ends 2-2.

3rd: Richards takes down, does a sitout and now leads 3-2 over Clark. Clark attempts a shot, sprawl by Richards and reshot, Clark sprawls away. Another shot taken by Clark on the edge, but they go out, wasn’t a clean shot either. Clark takes another shot off the whistle, ref warns Richards for stalling.Clark taking a bunch of half shots to keep the motion going, Richards backing and ref hits him for stalling to tie it 3-3.

SV:Clark takes a bit of a sloppy shot and Richards able to spin around for the takedown and win.

1st: Shot by Ervin and Carton gets a front headlock, they work back to the feet and Ervin in again this time he finishes for a takedown. Carton trying to work out and Ervin drops to the leg, ref is counting and Ervin warned for stalling by hanging on the leg while on top. Carton still trails 2-0. Stand up Carton and Ervin doesn’t follow so Carton is out, 2-1 ILL. Carton coming into Ervin, and Ervin takes a shot, but Carton fends it off. High crotch now for Carton and he is trying to come around and catch the far ankle, Ervin works to his seat, Carton tries to roll through, but they wind up going out of bounds no score. Single attempt by Ervin at the whistle but time expires.

2nd: Ervin starts down. Carton starts with heavy pressure on top, but Ervin able to get out quick and get his escape to lead 3-1. Ervin takes a shot, Carton able to get into a cowcatcher situation, he starts to run it and Ervin wisely bails out to give up the takedown. 3-3. Ervin gets Carton’s leg and is trying to come around for the reversal, but they get stalemated. Carton still on top. Ervin  up to his feet and he is out, he now leads 4-3. Ervin down on a knee trying to make Carton come to him. Period ends.

3rd: Carton starts down, tries to come up to his feet, Ervin drops to a leg and picks it up to tree top for a return. Now carton trying to fight for hand control, gets to the edge and they go out. Carton to his feet right away and is out to tie 4-4. Ervin gets in pretty deep on a single, but Carton able to fight it off. They go out of bounds again. There is a stall warning on Illinois for backingout, that should be a point Iowa. Illinois coaches are warned on that call as well. Ervin takes another shot, Carton warned for stalling. Ervin gets bellied out and Carton trying to break Ervins hands.

1st: Early going is some collar tie, and hand fighting. Sorensen about drops to a double, but backs out of it before he committed. Langenderfer and Sorensen go out of bounds. Sorensen moving the head and he drops to a single and is able to come across for the finish and 2-0 lead. Langenderfer hits a roll for an escape, Sorensen back in on another single quickly for a takedown 4-1. Sorensen tries to work an arm, then a half, period ends.

3rd: Sorensen takes down. Hand control and to his feet, Sorensen is out quick. Single is working good for Brandon, another takedown 10-2, escape Langenderfer, 10-3. Sorensen tries a double, switches to a single and gets around for a 12-3 lead now. Working an arm bar, over 3:00 RT. Stalling on ILL, 13-3 Sorensen. Escape, Langenderfer, takedown Sorensen he wins.

2nd: Cooper picks down. IMAR optional start and gives the escape, 10-3 IMAR. IMAR gets an easy go behind for a score 12-3. Break to fix IMAR’s head gear, option start IMAR, escape Cooper, takedown IMAR 14-4. Stall warning Cooper on bottom. Escape Cooper. IMAR changes level grabs an ankle, switches to a single and finishes for another takedown 16-5. Cooper tries to come up, mat return and IMAR able to get 4NF.

1st: Rodrigues in on a shot, but Rhoads fights it off and they are back on their feet. Rhoads makes a motion to go to an ankle pick, but doesn’t follow through. Lots of pressure from both guys. Rodrigues now in on a single and is able to switch to a double on the finish, 2-0 Rodrigues. Rhoads to his feet and out, 2-1 Rodrigues.Rhoads warned for stalling, Rodrigues taking some shots and Rhoads is more or less just hand fighting. Period ends.

3rd: Rhoads takes down. Rhoads up and out 7-3 ILL. Shot by Rodrigues, Rhoads looks like he was going for a body lock and Rodrigues able to power through for a takedown. Rhoads gets out 9-4. Rodrigues in on another shot, Rhoads gets a little funky and gets out. Rodrigues gets another takedown near the buzzer and is going to win his one.

1st: Meyer gets a two on one and is moving Reinemann around pretty easy. Now a shot by Reinemann and Meyer able to cross face and get around for a score. Meyer bellies Reinemann out, he works to his base, belly out again, this time Reinemann up and out, stall warning on Reinemann as they go out of bounds. 2-1 Meyer lead. Two on one for Meyer and he is able to drop off to the side and finish for takedown. 4-1 Meyer. Meyer cuts Reinemann on the edge they go out. Meyer with another two on one, drops down catches the leg and is able to finish a takedown on the edge with short time.

3rd: Meyer starts down. Caution Illinois, Meyer is out quick, 16-8. Takedown Meyer, cuts Reinemann for the escape, go behind takedown Meyer, scoring at will. Escape Reinemann on the edge. Meyer goes inside single for another score. Think it’s 23-9. Reinemann to his feet but is returned

2nd:Brooks takes down. Brooks to his feet quick and is out, 3-0 lead. Brooks tried to shuck him by, but it wasn’t there, both working the collar tie. Brooks does a knee tap, doesn’t commit. Looks like Brooks it trying to see if he can get double underhooks. Been close, but period ends.

3rd: Koepke takes down. Koepke goes to his feet and hands, but Brooks just staying heavy on top. Koepke gets to his feet but is returned, now Koepke tries a switch, Brooks bails and gives up the escape, 3-1. Koepke tries a shot, but Brooks has deep underhook that stops his momentum. Koepke with another shot, just about puts Brooks hip on the mat, but Brooks fights it off and it gets stalemated. Another shot by Koepke, Brooks warned for stalling, Brooks able to come around off the shot for his own takedown.

Casey’s Pizza Give away: comment your favorite Hawkeye and why!

1st: Lee comes with a double, but Burak fights that off. Lee drops to a knee to maybe attempt a shot, but comes back up. Burak in on a single and finishes a takedown. Caution Burak on a restart. Lee to his feet, Burak gives up the escape, 2-1 Burak lead. High crotch attempt by Burak, no score. Another high crotch, brings the leg up, trips Lee and drags his toe as they go out for the takedown. Sitout by Lee, he keeps coming around and Burak has to bail out and give up the escape.

2nd: Lee starts down, trails 4-2. Lee to his feet and out, 4-3 Burak lead. High crotch attempt and takedown for Burak, Lee gets out, stall warning on Lee for backing out. Think Illinois wants to talk about the last Burak Takedown.Actually challenging a locked hands it sounds like. Either way call stands, 6-4 Burak lead on their feet. Both guys trading some half shots to end the period. Burak comes on another attempt, but can’t catch the leg. Period ends.

3rd: Burak takes down Burak to his feet and gets his escape, 7-4 lead. Burak too quick, and hits a smooth high crotch for a takedown, escape Lee, 9-5 Burak. Takedown Burak 11-5, cuts Lee again 11-6. Burak relentless, stall warning Lee, point Burak, another stall on Lee as they go out, another point Burak.

1st: Snap by Black and he just about go around Stoll, hung on to the arm and Stoll does a good job circling and keeping his balance for no score.Both guys hand fighting and circling the mat. Stoll really trying to pull Black’s head, working some snaps to move him around the mat. Period ends no score.

2nd: Stoll will go down.Stoll working for hand control before he comes up, but Black able to belly Stoll out. Stoll gets back to his knees trying to come up again. To his feet and gets his escape.Black has :43 RT. Not much to report with both guys on their feet. Period ends.

3rd: Black takes down, Black tries a roll and Stoll able to stay on top and flatten Black out. Stoll was working a half and tries to roll the near wrist, when he switched sides to run it, Black got to his knees. Black now warned for stalling. Stoll bellies Black out. Brooks trying to dig out an arm bar, now switches to a half. Period ends Rideout for Stoll

18 thoughts on “Iowa vs Illinois Play-by-Play”