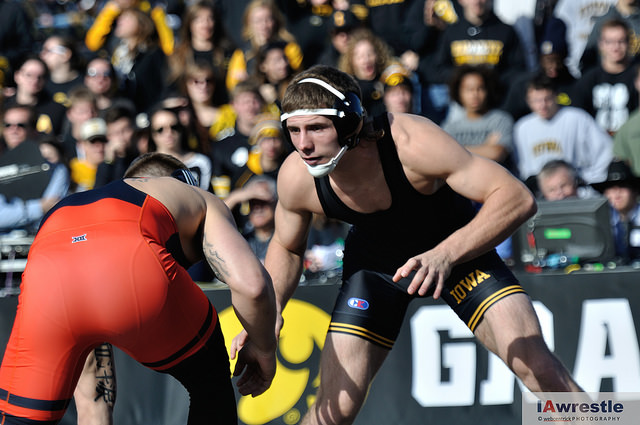 The Hawkeyes began their two dual road trip in solid fashion as they won 26-12 over border rival Illinois taking – seven of ten matches from the Illini.

The dual started off in typical Thomas Gilman fashion at 125, as the junior racked up 22 first period points, which included two six point throws, to defeat Francis Edelen by first period technical fall. Gilman was not the only Hawkeye to rack up a bonus win tonight however as Big Ten wrestler of the week Brandon Sorensen won by major 16-4 over Kyle Langenderfer at 149, and Alex Meyer also earned a technical fall 24-9 at 174 over Isaac Reinemann.

The Hawkeyes also got a big victory when Illinois native (but Davenport Assumption graduate) Topher Carton got a 5-4 win over Brock Ervin at 141. With the score 4-3 to start the third period, Carton was able to tie the match at 4-4 with an escape. Carton then proceeded to push the pace in the match and when Ervin failed to get his offense going he was penalized with a stall warning that resulted in a point for Carton. That stall warning wound up costing Illinois a chance to fight off an early upset.

The two Sams were also able to get wins for the Hawkeyes. Sammy Brooks won 6-1 over Jeff Koepke at 184, and Sam Stoll pushed his career record to 2-0 over Brooks Black with a 2-0 decision to close the dual at heavyweight. Stoll’s points came from a second period escape and a rode Black the entire third period for a riding time point. Despite being on top the entire third period, Stoll continued to work for a score and even earned a stall warning on Black for failing to work to get out.

Illinois was able to claim to big victories in the matches they were favored in on the night. #1 Isaiah Martinez was able to cruise to a 21-5 technical fall over Edwin Cooper Jr. at 157 and Steven Rodrgiues picked up a 12-4 major decision over Patrick Rhoads at 165.

The lone “upset” for Illinois on the night occurred at 133 where Zane Richards was once again able to best Cory Clark 5-3 in sudden victory. Last year these two met on three occasions with Clark winning two of those. Aside from the 8-2 decision by Clark at the Big Ten conference tournament, each match was decided by two points our less.

The Hawkeyes continue their road trip by traveling to Northwestern, for a 2:00 PM Sunday dual.