Iowa resumes dual action on the road against Illinois 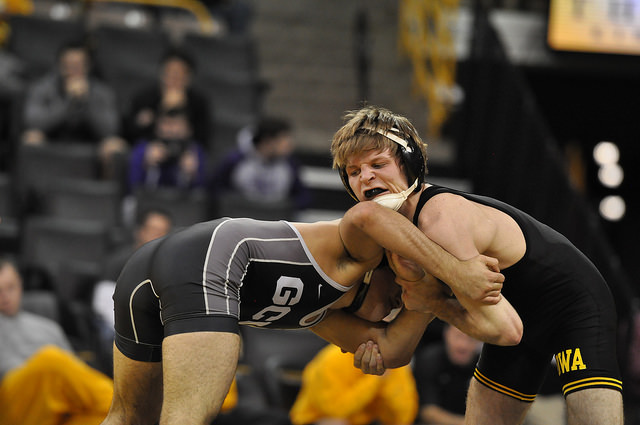 The Hawkeyes jump back into dual season mode with a road trip to Illinois this weekend as the Hawkeyes will take on the Fighting Illini of Illinois on Friday, followed by the Northwestern Wildcats on Sunday. This will be Iowa’s second and third conference duals this season, with beating up Rutgers 29-6 back in December.

Last year these two teams provided plenty of fireworks, with one of the highlights being Alex Meyer’s last second pin against Zac Brunson at 174 pounds in a 25-12 Hawkeye victory. What’s impressive is despite the lineup turnover Iowa had (five seniors graduated) this dual will feature 13 returning starters from last year’s meeting with bonus points once again likely to play a big role in the winning team’s outcome.

The Hawkeyes will have their bonus opportunities as well with both Thomas Gilman (125) and Brandon Sorensen (149) both off to undefeated starts to their season. Prior to the Midlands semifinals, Gilman had won ten straight matches by bonus to start the season. Sorensen had a similar streak winning nine straight matches by bonus though his ended in the Midlands quarterfinals. Sorensen will also have a rematch with Kyle Langenderfer, a match that ended with the Hawkeye winning 11-5.

It will be interesting to see what Iowa should expect from heavyweight Sam Stoll, as bonus points may be on the table for the freshman heavyweight against Illinois sophomore Brooks Black. The two have met on one occasion, the 2014 Midlands, and it was Stoll’s signature victory of his redshirt season as he won 3-1 over Black. While that was just a narrow margin of victory, we have seen a bit of an evolution of Stoll who put up an 11-1 major decision over a top 12 ranked Ross Larson in the third place match at the Midlands.

Nathan Burak was one of three Midlands champions crowned the other weekend (Gilman and Sorensen were the other two) and the senior looked impressive picking up two bonus point victories along the way. So far Burak has shown a lot more confidence in his attacks this season, and if he continues to keep his pace going the third period could be a nightmare for Andre Lee.

As mentioned in the opening, Alex Meyer could have a rematch with the #5 ranked Zac Brunson at 174 pounds and after being seconds away from a win a year ago, it will be interesting to see how Brunson comes out in this match. Isaac Reinemann actually started for Illinois this past Sunday, which may call into question Brunson’s availability for this dual as well. Despite taking third, Meyer is coming off a rough Midlands tournament.

After 12-0 start to the season Sammy Brooks finally suffered his first loss of the season to David Taylor, though Taylor being a post grad means Brooks didn’t lose an official match until he lost to Hayden Zilmer in the third place bout. Brooks has been an absolute monster this season with bonus points in 9 of his 15 victories so far. Jeff Koepke is a solid wrestler who recently was removed from the rankings. Last year Koepke wrestled 197 for Illinois making him on the larger side of 184.

At 165 Patrick Rhoads went a long way in trying to win the starting spot in the lineup with his seventh place Midlands finish with his only losses coming against a pair of top ten ranked wrestlers. Rhoads will have his work cut out for him with a tough Steven Rodrigues looming, who has turned into an All-American contender at 165 since his bump from 141 where he was a season ago.

Cory Clark stole some headlines at the Midlands championships when he was pulled just prior to the start of the semifinals round with an injury. It later came out Clark was dealing with a knee issue, but Brands later stated that Clark could have wrestled if the situation would have called for it. His opponent will be Zane Richards, who was the first and only wrestler to ever hand Clark a loss inside Carver-Hawkeye Arena.

The final question is the seemingly never ending who will start 141 for the Hawkeyes this week question as the Hawkeye will be up against a solid Brock Ervin. The biggest question answered last week at this weight was that Turk is still lacking in development, particularly on the mat. The two biggest front runners are most likely Topher Carton, who had the most successful weekend at 141 for Iowa, and Brody Grothus, who will most likely be making his debut this weekend in some way (whether in a dual or at an open). Fans have been waiting all year to see Grothus in action at this weight, and they may finally get their wish.

This is definitely a must watch dual with Iowa favored in five matchups, with Illinois having some really good chances to win 133 and 174 despite being outranked. The other big caveat is without Clark, Iowa is lacking depth at 133, and may need to pull a redshirt to avoid a forfeit. Bonus points will be at a premium, and both teams will know it, which means we should see an extra motivated Gilman and Martinez.

A Northwestern preview/breakdown will be available later in the week.