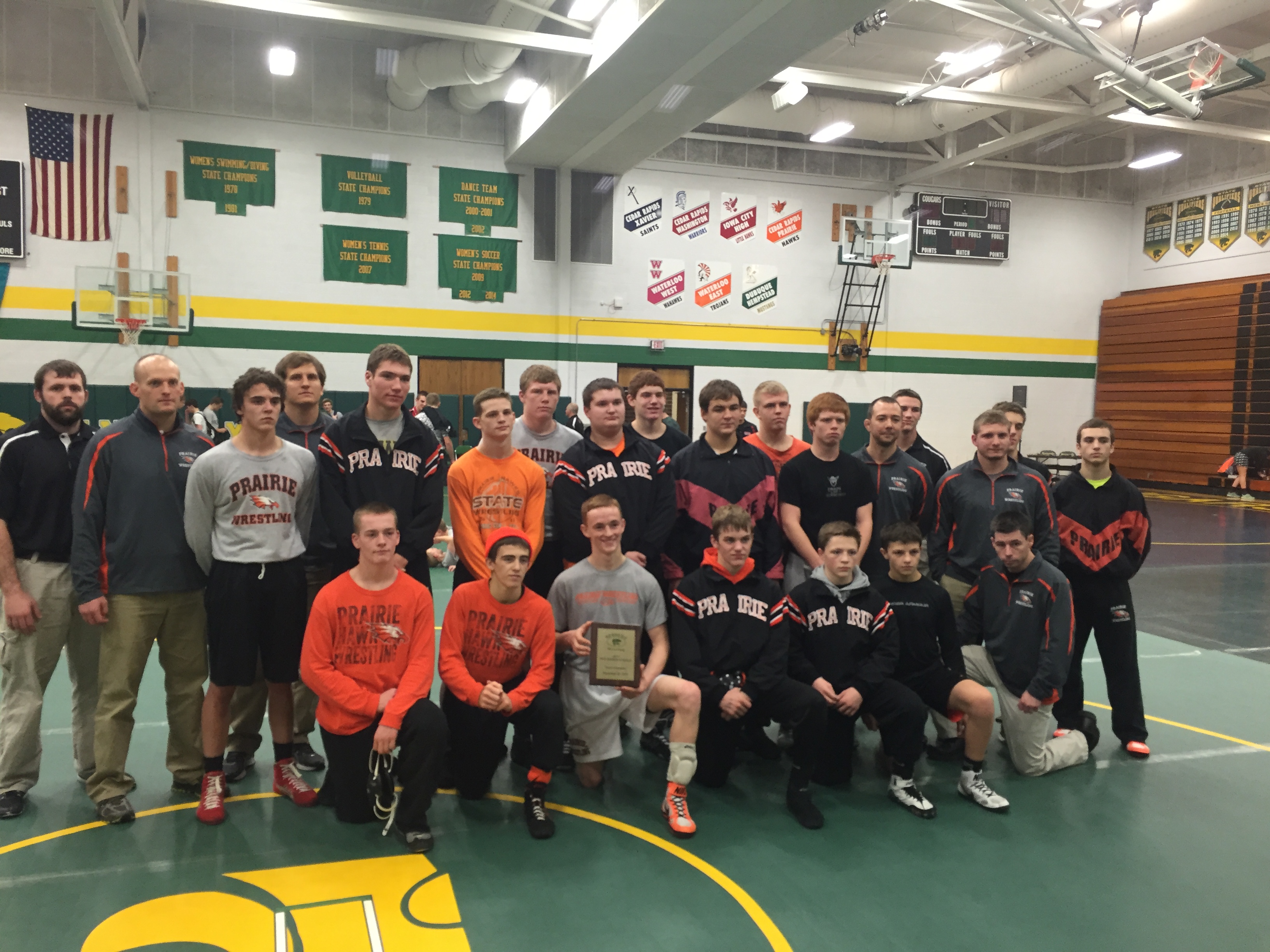 The Kane Thompson led Cedar Rapids Prairie Hawks made history tonight claiming their first Five Seasons dual tournament title by defeating one of 1A’s top teams in Alburnett. Prairie was able to stave off a late comeback by the Pirates getting key wins from #1 Sam Uthoff and Chase St. John at 132 and 138 to seal the match.

“At 138 we saw improvement,” Thompson said, “(Both teams) were at the same tournament last week and St. John got beat by his guy 3-2. We made some small adjustments, worried about where we were good versus where he is good and came out with the win there.”

The win carried a little more significance for Thompson, considering just one year ago it was him leading the Alburnett program, which is now headed by former Coe College standout Clayton Rush.

“It feels fanatic,” Thompson said of his program’s win, “That final dual was against a team that I coached just last year and the previous eight years. It was good to see two high caliber teams in the finals. You knew it was going to be a battle”

With a Five Season dual team title and coming off an Independence Invite title a week ago, Thompson has been encouraged by his teams results, but that doesn’t mean that he doesn’t see areas where they can get better, “I think there are a lot of adjustments to make to be honest with you. I think we are wrestling well, but we have some guys that get some leads sometimes and they tend to hold back or shut down and almost protect those a little bit. I would like to see some continuous attacks and build those leads. If you got a 6-2 or 7-2 lead, lets work towards the major.”

The final dual started off with a bang as Alburnett’s #9 Tanner Sloan (170) pinned Derek Horak to get things started, but Prairie would go on to win the next six matches to go up big 31-6. #5 Ben Moyer (120) picked up a big fall and #3 Drake Halblom defeated #7 Trenton Wennermark (126) to put Alburnett back in the dual. The upset by St. John ended up being a back breaker – if the match went the same way it did the week prior, the two teams would have tied at 37 needing to go to criteria.

The day also featured several top ranked matchups including #1 ranked Shea Hartzler of Linn-Mar getting knocked off twice. The first was a meeting with the #1 (1A) Paul of Alburnett going down 5-3. The second was an upset by #4 Ben Sarasin of Cedar Rapids Kennedy.

“It’s all about coming in believing you can win,” Sarasin told me,”I knew he was a scrapper and knew he went really hard, but I got to my offense and kept in good position. I tried to do what has made me successful in the past. I need to keep working hard and keep my conditioning. I know I just beat the #1 kid, but I had a loss last week that I am still trying to avenge.”

Host school Kennedy would finish third on the day, with Sarasin’s 5-3 decision being the final match on the day for the Cougars. Coming into the match Kennedy led Linn-Mar 38-36, but Sarasin wasn’t going to let a number get in the way of his team leaving with a victory.

“Our team has a lot of potential and I think we showed that today. Even missing a couple starters, giving an injury default, one of our varsity wrestlers moved away. All our guys wrestled great today, we really fought.”

Other highlight matches on the day: