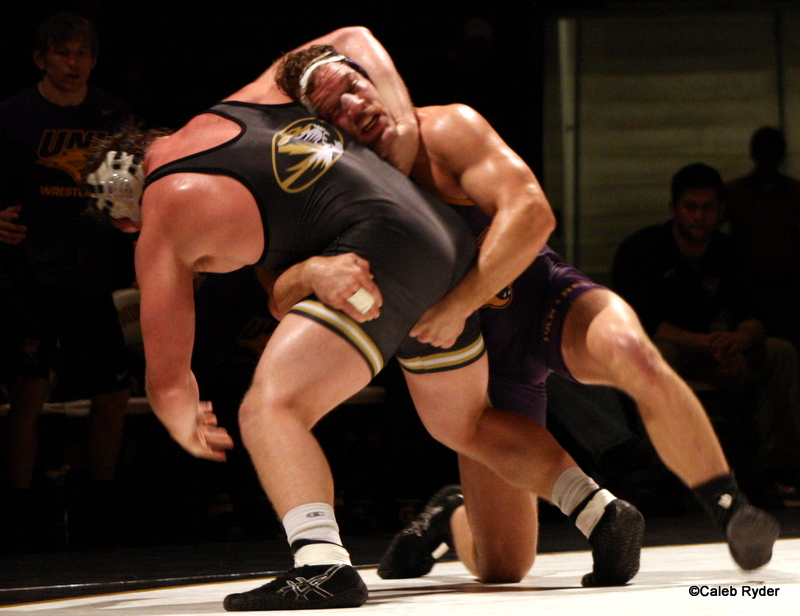 The top 25 ranked Northern Iowa Panthers will head east to the Journeyman/ASICS Northeast Duals to begin the season and with that they will face off with three Division I schools, who may not be ranked as a team, but bring plenty of heavy hitters in their lineup. The Panthers will face off first with Hofstra University early in the morning, followed by Oregon State around lunchtime, and finish with Rutgers.

A total of 11 wrestlers ranked by InterMat will appear in the duals amongst the four teams, but as the season progresses, one would expect several more wrestlers to show up in the rankings, and many to improve where they stand now.

Of the three teams Northern Iowa will face, Hofstra brings the “weakest” lineup featuring only one ranked opponent at 141 pounds. During UNI wrestle offs it looks like Missouri transfer Trevor Jauch has emerged as the early season favorite for the spot and he will face #15 Jamel Hudson. After defeating teammate Jake Hodges 17-0 in the wrestle offs, this could be an opportunity for UNI to see if they have something truly special.

This could also be a historical dual for head coach Doug Schwab, who may start a first true freshman for the first time at 157 if Bryce Steiert takes the mat against Jahlani Callender. Steiert has all the tools to excel at the Division I level, and the fact that Schwab already thinks he is ready for the starting lineup speaks volumes about the former Waverly-Shell Rock standout.

The Oregon State Beavers bring a talented team to the duals, which includes several of the key pieces from their 2015 PAC conference championship team. The entire UNI lineup should expect a tough matchup, and at two of the weights fans will be able to watch two top 12 wrestlers face off.

Dylan Peters will have the talented sophomore #12 Ronnie Bresser at 125 to start things off and when these two met last year it was a victory won 8-5 by Peters. A 2014 All-American for Doug Schwab, Peters has already positioned himself among some of the UNI all-time greats making the top ten career falls leaderboard by the midpoint of his career. Not to look too far ahead, but a win over Bresser could look nice on a seeding resume in March.

Also wrestling the #12 ranked wrestler at his weight, Taylor Berger will take on Seth Thomas at 165 pounds. Regular starter Cooper Moore has said to be dealing with injuries and had he wrestled in this match it would be a good matchup. Berger is a redshirt senior, having spent the last three seasons behind both Moore and Jarrett Jensen.

But the real battle to look forward to will be the heavyweights, where MAC favorite Blaize Cabell will test his #4 ranking early against #7 Amarveer Dhesi. Cabell is coming off a breakout junior season for the Panthers making the round of 12 at the NCAA championships. Dhesi won 27 matches as a true freshman and won a Junior World silver medal in freestyle before redshirting in 2015. There are highlight matches in all three duals, but this match might be the biggest of the weekend.

Iowa high school fans will recognize the name Jack Hathaway, who wrestled at Iowa City West prior to Oregon State. After winning a conference title at 133 last season he will look to move up to 141 to face Jauch.

The final ranked wrestler for the Beavers is #11 ranked Cody Crawford, who will be a handful for either Jared Bartel or Cody Krumwiede, whichever wrestler Schwab decides to roll with.

To finish things up out east the Panthers will finish with the Scarlet Knights of Rutgers, who bring four ranked wrestlers into the final dual. The Rutgers feature a trio of Anthonys at 133, 141, and 157 which should all prove to be interesting matchups.

At 133 redshirt freshman Josh Alber has yet to be discussed in this preview, but his potential has been often discussed on IA Wrestle. He will take on Anthony Giraldo, another redshirt freshman. These two wrestlers were separated by 13 spots in the recruiting rankings coming out of high school and so far it appears both are living up to expectation. Last season when these two met at the Midlands, Alber won the meeting by a score of 10-1.

The second Anthony wrestles at 141 pounds for Rutgers and will be the third big match that Jauch could face this weekend. Ashnault features a #8 ranking after taking eighth as a redshirt freshman at the 2015 NCAA championships.

The final Anthony is another former All-American back at 157 pounds in 2014, #9 Anthony Perrotti. After an 0-2 finish at 157 last March Perrotti, has decided to move up to 165 where he will face off against Berger.

Richie Lewis heads back to his native state of New Jersey after earning JUCO All-American honors for Iowa Central back in 2015. Lewis spent most of last season ranked #1 for Iowa Central before suffering a fluke loss at the NJCAA championships. If Steiert does indeed go for the Panthers expect a good scrap between these two.

That leaves Cabell’s second big matchup of the weekend vs another top eight opponent, this one #8 ranked Billy Smith at heavyweight to close things out.

Look forward to a good weekend of action, which as we mentioned above, Flowrestling will carry the stream of the event. For some this will be a great opprotunity to test the field and see where they stand and with the big early season matchup with Missouri looming two weeks out, this will be a great chance to get a barometer of what team the Panthers can be this season.