Tom Brands Looking for Wrestlers to Step Up in 2015-16 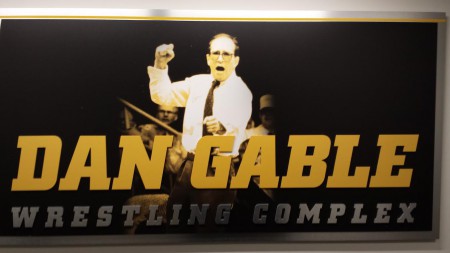 The Iowa Hawkeyes held their annual preseason media day on November 5th inside Carver-Hawkeye Arena and head coach Tom Brands met with the media to discuss the upcoming season and it was plain to see that while the Hawkeye do not come into this season as the #1 ranked team as they did a year ago, but at the same time Brands sees a lot of good things in his wrestlers and just a question marks remain in his lineup to address before the home opener. The question marks feature a number of wrestlers all vying for a spot in the lineup, but in the end, Brands is looking for wrestlers to step up and take the spot form their teammates.

Of course that home opener is the well documented dual between Oklahoma State and the Hawkeyes, and will take place inside Kinnick stadium as they look to try and break the single event attendance record. Ticket sales for the event are already over the 31,000 mark and with over a week until the event, Iowa is hoping that the rivalry will encourage more fans to show up.

“It’s a big deal because it’s about two storied programs and a rivalry that continues. These rivalries are getting tougher to schedule because of the Big Ten getting bigger.” Brands said on the outdoor match.

From there the media got into the lineup and opening remarks on that were directed to new heavyweight Sam Stoll, who looks to replace three-time All-American Bobby Telford.

“Sam Stoll is doing a good job and he’s going to have a learning curve. The biggest thing that he has to realize is that it is about being at your best every time out, and if he can do that, he has a chance to be a real good heavyweight.”

Starting off the lineup will once again be Thomas Gilman at 125 and Cory Clark at 133 pounds, both of which saw their sophomore seasons end with them standing on the podium. Clark is the highest returning All-American for the Hawkeyes finishing runner-up to Oklahoma’s Cody Brewer.

“Cory Clark has got a lot of firepower. He’s one of these guys that it’s never good enough, not to the point where he derails himself or obsesses over something that isn’t important, but to the point where everything is important and he wants to be perfect every time out. I think we talked about it last year and Terry mentioned it right after his match with Brewer in the national finals, how he was dissecting that match immediately, and we talk about owning it a lot in this program. We talk about no excuses, and the thing about Cory Clark is, and really all of our guys that I’ve mentioned, they own it. There’s really no excuses, and that’s why they get better every day.”

Brands then continued on about where Clark could be headed during his time in an Iowa singlet, “He’s got two years left, and he’s got a chance to stamp himself as one of the best in the program, and based on his ability to wrestle in an exciting fashion and based on his credentials thus far.”

Next, Brands talked about 141 pounds, where the first lineup question emerges for the Hawks, “Last year I talked about Topher Carton last year, talked about how he’s matured and come around, and he really has had some opportunities to do very well….and he needs to assert himself if he’s going to be the guy. The same with Logan Ryan. I’ll tell you what, we’ve got a true freshman in there, Vince Turk, who’s relevant in the conversation, as well. So all three of those guys will be competing this weekend, and we’ll see how it shakes out, and that will be the determining factor.”

While none of those names is a true surprise, the biggest takeaway might just be that Brands still hasn’t ruled out using Turk, who would be the first true freshman right out of high school to wrestle under Tom Brands in his decade at Iowa. While the odds that the redshirt is pulled for Oklahoma State seem like a long shot, it is definitely one of the top storylines to watch for the Hawkeyes as they look for someone to step up and assert themselves. Senior Brody Grothus, who was a 2014 NCAA qualifier at 149 pounds is also expected to challenge at 141 pounds starting late December or early January.

At 149 pounds All-American Brandon Sorensen returns to the lineup, after having a banner freshman year. Sorensen was the first Hawkeye to win 40 matches in a season since Ed Banach did so in the mid-1980s and was named the conference wrestler of the week twice.

“He’s got to realize that he’s got some pretty high-powered, high-potent offense, and he’s got to go-go-go and not just go…go…go.” Brands said on Sorensen, “He’s made progress, as well.”

Up next the Hawkeyes face a 157 and 165 weight-classes which both graduated seniors and have no true successor ready to step up. Expected to compete for the 157 pound spot will be freshman Skyler St. John, junior Logan Thomsen, and senior Edwin Cooper. 165 pounds will also have a trio with between senior Patrick Rhoads and freshman Burke Paddock and St. John here as well.

Despite graduating three-time All-American Mike Evans from 174 pounds, it’s easy to see that Brands feels the weight is in competent hands, “Alex Meyer is a name that makes me smile. He is everything from a work ethic point of view in everything that he does. He’s grown up tremendously since his first couple months here, and the other thing is that he’s a leader in that room from a just put your head down and go to work example.”

That leaves 184 and 197 which also return their 2014-15 starters in Sammy Brooks and All-American Nathan Burak respectively. “Nathan Burak is a two-time All-American. He’s a senior; he’s a 3.8 student. He’s everything you want your program to be looked upon as. A lot of times he’s not maybe given enough attention, not that he’s seeking the attention anyway, but when you talk about leadership, you talk about an example of what to look for in a student athlete, he’s a wrestler that embodies that and represents our program very well.”