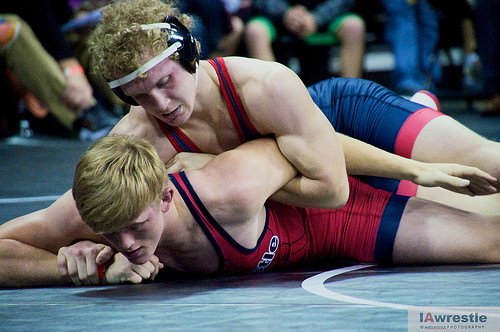 The Super 32 tournament is now concluded in North Carolina and there will be three Iowa natives coming home with hardware, and an additional two recruits for Iowa and Iowa State who also earned honors at the national tournament.

A tough round for Iowans and Iowa recruits alike was saved in the 160 pound semifinals when Kaleb Young went up against the #7 ranked  Mikey Labriola of Pennsylvania. It may have been an upset on paper, but Young made it look easy when he shot in on a single to open the match and then was able to lock up a cradle against Labriola to get the match’s first score. From there Young went suicide roll with the cradle locked up and put Labriola on his back. Unable to fight off the tightly locked cradle for very long, Young secured the win and advanced to the finals where he would face Daniel Bullard of Georgia in the finals.

The finals matchup for Young was a big one as he was squaring off against the #6 wrestler in the nation up a weight class. Coming off a seventh place finish in 2014, Young already took a big step forward with that fall over Labriola and he was able to continue that against Bullard in the finals. Once again the cradle was there for Young to start the match off, but that was followed by a reversal. From there Young was able to get out and hit a go behind to take a 5-2 lead to start the second.

In the second Young hit a reversal to Bullard’s back for a five point move that was the nail in the coffin. Young cruised to a 12-5 win and his first Super 32 title. He joined future teammate Michael Kemerer as Young Guns club wrestlers to win the national tournament.

It was a tough ending for Underwood’s Alex Thomsen (120), who had been lighting up the scoreboard for most of the tournament. In his match with Austin DeSanto of Pennsylvania, Thomsen was unable to register a point of offense and wound up losing 3-1 in sudden victory. With the match 1-0 and Thomsen trailing DeSanto was hit with his second stall call to tie the match. From there Thomsen was unable to get any sort of penetration on his shots, which led to us seeing a Thomsen we haven’t seen very much of in his short career. In his next match Thomsen was able to get in on more offensive attempts, but wasn’t able to ride Tyshawn White out in the the ultimate tiebreaks which bumped him to the fifth place match. In the fifth place bout Colin Valdiviez did his best to slow Thomsen, but Alex was able to slowly build into his offense going up 9-2, before he gave up an escape and late takedown to make it a 9-5 final.

While Thomsen’s goals for this weekend included leaving with a new belt, this was still a great performance for the soon to be sophomore, who put up some big wins against some tough opponents. What will be key for Thomsen is to see what he learned from this tournament, as his mat wrestling cost him in back-to-back matches.

Cyclone commit Kanen Storr had a rough semifinal at 138 pounds, going down to the #5 ranked wrestler Brent Moore of Ohio. Storr was able to hit an ankle pick to start things off against Moore, but surrendered a reversal to tie things up. What was most impressive in this match was Storr’s action from bottom, as he was able to go from stand up, to switch, to granby in quick succession. The only problem was Moore was well prepared and was able to follow through the action, with Storr not being able to get out until six seconds left in regulation to tie. The match was then decided in the ultimate tie breaker, where Moore was able to ride Storr the full thirty seconds. Storr was later bumped by a similar result, a 4-3 defeat by Ryan Deakin to drop him to the fifth place match – which Storr would forfeit.

Kyle Biscoglia (106) of Waukee needed a tough 1-0 victory to get past the bloodround and lock up a spot on the medal stand, but what was more surprising was his consolation quarterfinal bout with #1 ranked Dylan D’Emilio of Ohio. The pair met on two occasions this summer with D’Emilio taking both wins, but Biscoglia was able to get the ride out in ultimate tiebreaks to win 2-1 over the presumably former #1 wrestler. After Nicholas Aguilar picked up a 6-4 win over Biscoglia, it setup a rematch between the Waukee wrestler and Christian Nunez for fifth. The rematch was similar to the first meeting as Biscoglia’s riding ability allowed him to take an easy 3-0 win to finish 5th.

Another wrestler that went down in the quarterfinals was New Hampton’s Noah Fye at 113, but he responded with a big fall in his bloodround match to lock up a top eight finish. Fye was then dropped in his consolation quarterfinal 9-2, and finished his day 8th at the national tournament.