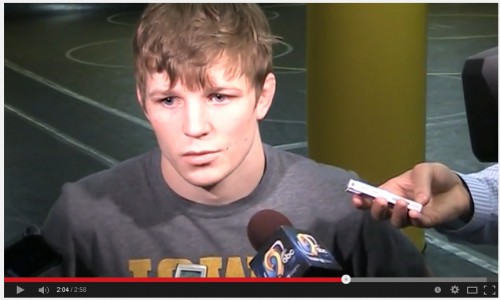 Are you excited to wrestle outside at Kinnick?

“Yeah. It’s crazy to even think about how that is going to look or about how it’s going to be, but it’s exciting. We will see when we get there what it will turn out to be, but from what I hear it’s supposed to be a pretty big deal.”

What’s it like wrestling at Kinnick opening with the #1 team?

What has been the emphasis to score more points on the mat?

“For me it’s coming out to score, not coming out to work into the match or to feel the guy out. You know what you got and that’s all that matters. Maybe you need to know what a couple of the things the guy has, but you don’t really worry about them, you just know about them so you’re aware of those positions. You move the guy and you score. You don’t have to move the guy for two minutes to hit a leg attack. You go out there you grab him, you move him, you shoot. You don’t get it, you grab him you move him you shoot, again, three-four-five attempts leads to a takedown usually.”

What was the biggest lesson you learned from your sophomore season?

“Probably the National finals match was my biggest lesson. Taking the basics and the things I started doing right and letting them kinda collapse on me and fall back because ti’s the biggest match of my life. Regardless how big the stage is or how big the platform is I have to have my mindset ready to perform at my best level. I felt ready to go, but I kinda fell apart a little bit in that match. That’s a pretty big lesson I took away from that. I have to get where I can wrestle at my best. Regardless of the pressure.”

What is the makeup of this team that has changed from a year ago?

“It’s hard to say at this point in the year because we haven’t really competed. Once we start wrestling and competing I think I will see a lot more of that. A lot of times I am working, their working so I don’t ever really have days where I can sit back and kind of look at what’s going on. I am kind of focused on myself and I feel like if I worry about myself, and everyone worries about their-self, I feel like good things should happen. If everyone has the same mindset and they are working towards it and you’re kinda selfish a little bit, I feel like that is a good attitude to have. One thing that is different is the seniors, the guys that have been my whole career are just gone, but I don’t think it’s different in a bad way. Those guys that were seniors, it was their fifth year and they were kinda leaders and guys looked up to them. Now they are kinda gone and they are not really out here for the younger guys to maybe look at, but the younger guys have newer guys to look at. The chemistry I feels quite a bit like last year.”