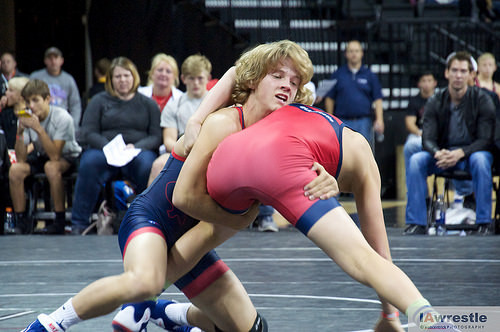 The round started with three Iowa natives reaching the quarterfinal round at the prestigious Super 32 tournament in North Carolina, but only one Iowan was able to advance to the semifinals and secure a place on the stand.

That wrestler was Underwood star Alex Thomsen, who came into his match the underdog, but judging from the final score you wouldn’t know that. Thomsen took on the #9 ranked Brandon Cray of New Jersey, but the old phrase “ranking are just a number” certainly applied as Thomsen cruised to a 18-5 major decision at 120 pounds. Thomsen will now go onto be the favorite in his semifinal when he takes on Austin DeSanto of Pennsylvania, who is coming off a big upset over #9 (at 126) Devin Schroder of Michigan in his quarterfinal.

Kanen Storr of Michigan showed off his toughness in his 138 pound quarterfinal match when he downed Evan Fidelibus of Pennsylvania. Fidelibus was able to take an early 2-0 lead, but Storr was able to tie the match with an early nearfall count in the second period. Storr added a takedown an reversal to win 6-4. Up next for the Cyclone commit will be the #5 ranked Brent Moore of Ohio.

Hawkeye commit Kaleb Young also looked tough in his match against fellow statesman Trent Hidlay at 160 pounds. Young picked up the match’s first score on a takedown in the first and was able to widen his lead to a 7-3 final. Young now moves on to face another Pennsylvania wrestler, the #7 ranked Mikey Labriola, in the semifinals.

Taking losses in the quarterfinals was Waukee’s Kyle Biscoglia at 106 pounds and New Hampton’s Noah Fye at 113 pounds. Both wrestlers only need to win one more match to secure a spot on the podium. Highland’s Drew West also needs one more win to reach the podium at 120 pounds.

The only wrestler Iowa did lose in the first round of today’s action was the #8 ranked Aden Reeves of Albia.