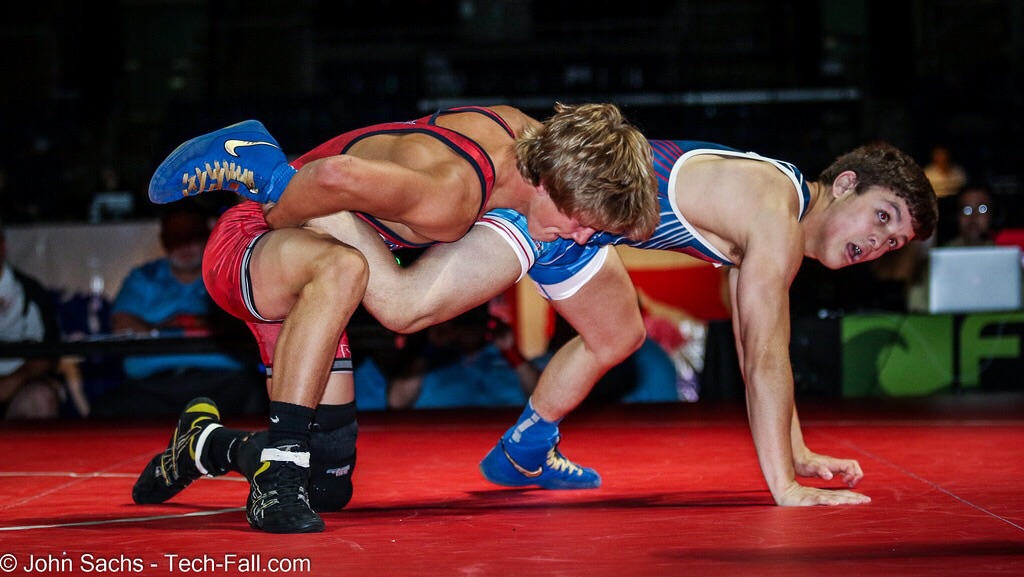 We are getting down to the nitty gritty rounds of the Super 32 where at this stage of the game everyone remaining is a big name. The state of Iowa has placed three wrestlers into today’s quarterfinals, and two additional wrestlers are fighting it out on the backside of their brackets. Wrestling will resume action in North Carolina at 7:00 AM Central time, and can be watched via live stream by Flowrestling.

Sophomore Kyle Biscoglia (Waukee) is the first quarterfinalist for Iowa, matching up with the #5 ranked Adam Busiello of New York at 106 pounds. An upset over Busiello could setup a showdown with the #1 ranked wrestler in the nation Dylan D’Emilio of Ohio. This past summer D’Emilio beat Biscoliga at both UWW Cadets and Fargo, but Biscoglia was able to close the gap in the latter match.

Making a surprise run into the quarterfinals is New Hampton’s 113 pounder Noah Fye. So far this has been a pretty strong off-season for Fye, with last weekend being a runner-up performance at Preseason Nationals in Cedar Falls. Fye will also have a New Yorker, Tommy Cox, who Flowrestling rates as just outside the top 20 rankings.

Alex Thomsen (Underwood) has already become synonymous with dramatic matches, as once again he was the talk of the wrestling community when he hit a duck under in a last second takedown to edge Ohio’s Justin Stickley 3-1 right before time expired. Thomsen should be used to some of the chatter as his Cadet finals match against Nick Raimo was regarded by many to be the match of the tournament, and earlier this month he dismantled Cole Manley at the Night of Conflict in what some considered that match of the night. We will see if he can keep the thrillers going when he matches up with #9 ranked Brandon Cray of New Jersey at 120 pounds.

Iowa State commit Kanen Storr of Michigan has reached the quarterfinals of the 138 pound bracket. He will be favored in his match against Pennsylvania’s Evan Fidelibus, who is dubbed an honorable mention wrestler. A win over Fidelibus should setup a showdown with Ohio’s Brent Moore who is the #5 ranked wrestler in the weight.

The Hawkeyes also have a recruit in the hunt as Kaleb Young will take on fellow Pennsylvania native Trent Hidlay in his quarterfinal. It is a Pennsylvania heavy side of the bracket as #7 Mikey Labriola is the favorite to reach the semifinal on Young’s side.

In addition to three Iowans in the quarterfinals #8 ranked Aden Reeves is still alive at 106 pounds and Highland Riverside state champion Drew West remains among the competitors at 120 pounds.