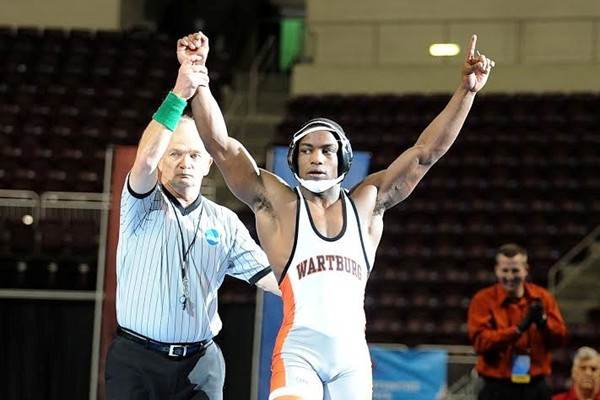 You can tweet your thoughts on the Wartburg wrestling lineup to @IAWrestle and @RossIAWrestle using the hashtag #D3wrestle.

Now we get to the heavy hitter in our Division III preview series, as the perennially tough Wartburg Knights bring a strong program back from 2015’s NCAA runner-up performance. Coach Eric Keller only lost two wrestlers from his second place team to graduation, returns six NCAA qualifiers for this year’s team. Last year only freshman Kaz Onoo failed to qualify for the NCAAs for Wartburg, by one spot at the Regional tournament.

Looking at this team, it looks like the anchor will once again be Kenny Martin, the returning NCAA champion at 149 pounds. Martin finished last year with a 30-3 record and being just a junior he doesn’t look like he is going anywhere anytime soon. D3wrestle’s Freshman of the Year Kaz Onoo may have outgrew 141 so there is a chance he backs up Martin this season.

From there you can pick and choose which All-American you would like to talk about. Junior Connor Campo should be back at 133 pounds after finishing eighth at this weight last year, Campo has shown a lot of improvement. As a freshman Campo wrestled up at 141 where he was the IIAC Freshman of the year, but last year he went 27-7 and won his second Regional title.

At heavyweight, Ben Nagle more than doubled his win total as a sophomore to finish 30-4 and was a fifth place All-American for the Knights last season. The depth at heavyweight is particularly deep for Wartburg as former Solon standout and transfer from the University of Iowa Lance Evans was 15-1 after transferring in last season. Former Maquoketa Valley state champion Tyler Yonkovic is in the fold as well.

Another fifth place NCAA All-American Drew Wagenhoffer will be back at 157 pounds. Last year Wagenhoffer went 30-8 for Wartburg with two of his last three losses coming to Steven DeWitt of Loras. Wagenhoffer is also 17 wins shy of 100 career wins for Wartburg, so that should be something to keep an eye on as well.

After a 18-6 campaign as a sophomore, former Waverly-Shell Rock standout Andrew Steiert will be back at 165 pounds for Wartburg. Steiert was able to reach the semifinals of the NCAA tournament last season before he wound up taking sixth and earning his first All-American honor.

At 197 pounds Wartburg returns another sixth place All-American in Gerard Roman. In his first two seasons Roman posted 25 and 26 wins, but last year he was finally able to break the 30 win barrier by going 31-7, including 9 falls. If Roman is able to maintain his winning pace he too should eclipse 100 career wins in a Wartburg singlet.

If Onoo is not able to make 141 for coach Keller, we may see this spot filled by Erick Clarke, a former four-time state medalist from Davenport Assumption. Clarke was 26-6 last season for Wartburg, but there is also the possibility that an incoming freshman is able to come in and steal the spot. Connecticut state champion Cross Cannone is a freshman who may be able to slot in.

That leaves three weights for the Knights that need to be replaced by a new face, and starting with the lightest weight class it will be interesting to see who can replace the production of former NCAA All-American Jake Agnitsch in the lineup. One of the more intriguing names is Two-time California JUCO finalist Arnulfo Aleo will be transferring in and he may be the favorite. He will be pushed by returning Knights Jared Braun and Zach Less, and Tanner Terry an incoming two-time Texas high school state champion.

At 174 pounds Iowa high school wrestling fans should see another familiar face as Eric DeVos has landed at the DIII powerhouse to finish his college wrestling career. If you were wondering if the 174 was a typo – it is not. After finishing his career as a three-time state champion at 126 pounds for Waverly-Shell Rock (two titles won in Minnesota) DeVos enrolled in Penn where he competed at 141 pounds. DeVos then transferred back to the state of Iowa where he was listed as a 157 pound wrestler for the Hawkeyes, but it now appears he will go at 174 for the Knights and try to fill the shoes of the departed Brandon Welter.

That leaves just the 184 pound weight class which should have quite a few interesting names competing for the spot. Three-time Iowa high school state medalist at Bettendorf, Bryan Levsen could try and make his way down to 184 with Roman having 197 locked down. Levsen was 17-4 last season at 197 pounds. Joining Levsen at this weight is Brit Bastow, who was 11-8 this past year for the Knights and two sophomores, Kyle Fank and Brendan Schott. Fank is the younger brother of Ryan Fank, who was an All-American heavyweight for Wartburg in the 2012 and 2014 seasons.

Overall coach Keller returns a great squad for this coming season after they were dethroned by Augsburg for the team title last year, you have to imagine the 2015-16 team will be hungry to right that wrong. They have the fire power, any time you can return six All-Americans in any sport, on any level, you know that team is full of talent. Add the D3 Freshman of the year, and a Junior College standout to the mix and this Knight team has eight legitimate starters in the lineup. Wartburg should make a push at yet another National title this year.