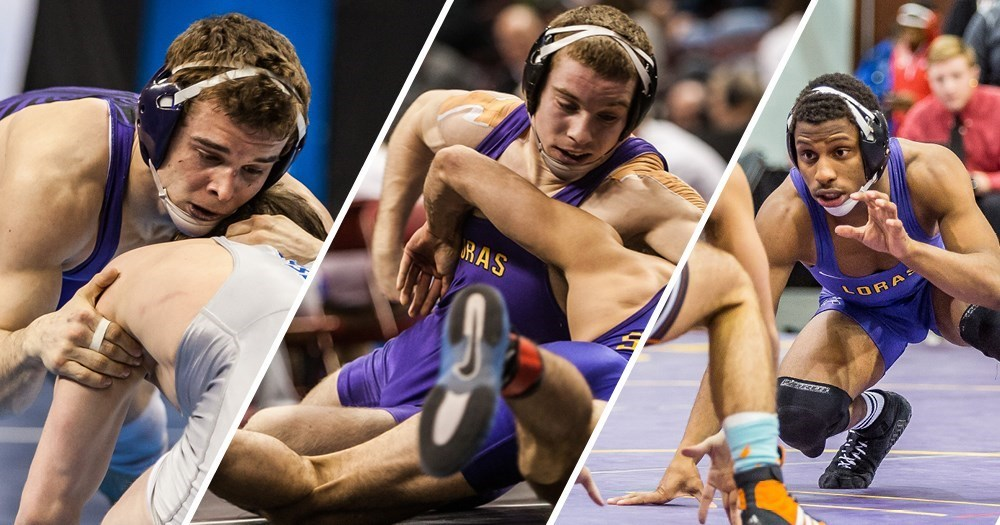 You can tweet your thoughts on the Loras wrestling lineup to @IAWrestle and @RossIAWrestle using the hashtag #D3wrestle.

Up next in our Division III series we look at the Duhawk program in Dubuque, Iowa and despite graduating All-American Steven DeWitt (who has joined the coaching staff by the way) head coach Randy Steward returns a pretty talented squad for the 2015-16 season and one that should produce some results on the national stage this year. In addition to DeWitt joining the program, John Prezzia, Jon Gapinski also make their debuts on the coaching staff, as does former Wartburg NCAA champion TJ Miller, who was named Associate Head Coach this spring.

The biggest hammer in the Loras lineup sits at 141 pounds as Nick Steger is the only returning All-American and NCAA qualifier for the Duhawks after he put together a fifth place finish at the NCAAs. Steger is at a tough weight in conference as Luther has NCAA finalist Drew Van Anrooy coming back, and Nahsid Barrow of Buena Vista and Kaz Onoo of Wartburg are two wrestlers coming off strong freshmen seasons.

In addition to Steger, Loras has two talented sophomores who just missed out on a trip to nationals, but the good news is that both will be back for this season. Michael Triplett is one of four returning 20 match winners for Loras and he will try and lock down 133 pounds for the Duhawks. At 165 pounds junior Greg Vance also finished fourth at Regionals in a bracket that contained the eventual NCAA champion and the sixth place All-American.

The third returning 20 match winner in the lineup is Malcom Watson, who will be back for his fourth and final season in a Loras singlet. Watson’s Regional bracket was also extremely tough last season as he had All-Americans Donnie Horner (Coe), Gerard Roman (Wartburg), and Matt Seabold (Central) all in his Regional bracket. Only Roman and Seabold return for 2015-16 so Watson will have an opportunity to make his mark on this weight.

Finally, sophomore Jimmy Davis will move up from 149 pounds to replace the now graduated DeWitt’s spot in the lineup at 157 pounds. Davis was also a 20 match winner for Loras in 2015.

That means that Loras returns five proven starters from a year ago, and in addition to the returning starters already mentioned, coach Steward will also have sophomores Dayton Olson (125), Awais Arain (197), and Connor Swier (285) returning for this season after all competing as freshman.

Evan Weaver will also be back in the lineup at 149 pounds for Loras. The junior out of Illinois won 16 matches last season and finished fifth at Regionals.

That leaves just the 174-pound spot in the lineup which needs to be filled for Loras to replace the now graduated Joe Butler in the lineup. There are two veterans in the lineup that Steward will be able to choose from in junior Tyler Ries or senior Ben Kindle. Incoming freshman Chris Malone may also challenge, or we could even see someone move up from 165 to try and challenge here as well.

With all that in mind it looks like the Loras program has put itself into a great position for the 2015-16 season. They don’t return a ton of firepower on the national level, but they do have a lot of wrestlers in the lineup with a lot of wrestling experience. The team will get a nice trip to Tennessee to the Gator Duals just before Christmas and they get to begin the postseason at home as they will host the NCAA Central Regional for the second consecutive year.

It looks like it will be an exciting year to be a Duhawk fan and we look forward to seeing coach Steward and new associate head coach Miller can do to get this program to finish higher than their 15th place finish from 2015.