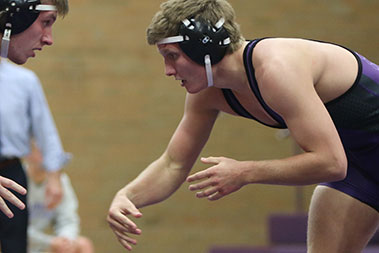 You can tweet your thoughts on the Cornell Rams wrestling lineup to @IAWrestle and @RossIAWrestle using the hashtag #D3wrestle.

We now take a look at the 2015-16 Cornell Rams squad, who after scoring just five points at least year’s NCAA championship will look to surpass that performance as the Rams return nine wrestlers with starting experience and are led by Head coach Mike Duroe, who is looking for his seventh top 20 finish since 2007.

Duroe comes into the 2015-16 season returning three NCAA qualifiers, and chief among them in none other than senior Trevor Engle (149), who looks to close out his career in a Rams singlet a four-time NCAA qualifier, but this time hopefully finishing on the stand. Engle is one of three captains for Cornell and he currently holds a 94-28 career record, winning at least 30 matches every single year.

Another captain and returning NCAA qualifier is Phillip Opelt who will look to lock down the 133 spot in the Ramos lineup. Just a junior, Opelt was a qualifier for the 2014 NCAA tournament by going 23-14 and a third place finish at the Regional tournament as a freshman. Now figured to be back in the lineup, the Neillsville, Wisconsin native will look to make it back to the national tournament which has a hometown feel being located in Cedar Rapids.

The other captain is senior Scott Smith at 125 pounds who will start the year off looking for his 50th career win. Last year Smith was in a tough Regional bracket which featured two eventual All-Americans, who have both since graduated.

Expect a battle at 141 pounds as it looks like 2015 NCAA qualifier Nathan Shank will move up to challenge Josh Martin for the third spot in the lineup. The move up by Shank makes a lot of sense as it allows Opelt to get back in the lineup, but it means that the former Iowa City Regina grad will need to get bigger to fill out into 141. Shank was the team’s most improved wrestler this past season.

The rest of the Cornell lineup will be filled by quality wrestlers who are looking to make that step forward and join their lightweight teammates on the big stage. Aaron Engle, brother of the 149 pound captain Trevor, is one of those wrestlers looking to step up at 157 pounds. This past season the younger Engle went 18-19 for the Ramos and missed out on the post season by one spot.

Veteran Michal Maksimovic will be back for his junior season at 165 pounds, though he may wrestle in one of the toughest weights as Coe’s NCAA Champion Farai Sewera and Wartburg All-American Andrew Steiert will both return at this weight. Still Maksimovic was 22-17 last season and should challenge for a NCAA spot.

Heavyweight Eric Tucker may not have placed at the Regional tournament last spring, but he has shown a ton of improvement over the last few years. Coming into last year Tucker has 30 career wins, but last year he beat his previous season best by six to end with a 23-13 season, including six falls and two major decisions. This will be another weight that will be tough for Cornell to break through in, but if Tucker keeps improving he should be a legitimate threat.

Finally senior Aburough Abegesah will look to round out his career at 197 pounds for the Rams. Abegesah was fourth this past season at the Regional, putting up an 18-19 record. Last year was Abegesah’s first year in the 197 weight class after moving up, so maybe after a full season at the weight he can take another step forward.

That leaves the 184 weight class which should see a three way race between a veteran and two new comers. Incoming freshman Jarod Cadena doesn’t have to move too far from his old stomping grounds of Cedar Rapids Prairie where he was this year’s class 3A 182 pound state runner-up. Joe Keller will also be an interesting name to watch as he comes in from the state of Colorado where he finished third in 2014, and was a 2015 state champion at 182 pounds. Both Cadena and Keller will push junior James Garrett, looking to make his way into the lineup.

This looks like it will be a tough squad that Cornell will put out this season, particularly in the lightweights where they have wrestlers with the most NCAA experience. After Trevor Engle has put so much into his career at Cornell it would be great to see his hard work rewarded with an All-American finish, and he should be one of the must-watch Rams this season.