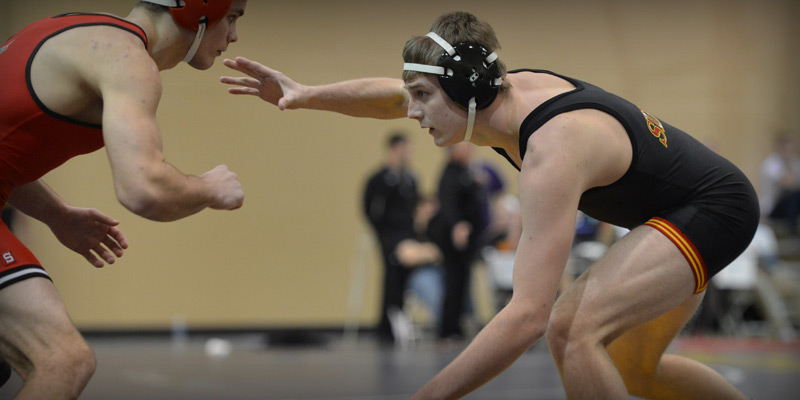 You can tweet your thoughts on the Simpson wrestling lineup to @IAWrestle and @RossIAWrestle using the hashtag #D3wrestle.

Up next in our DIII Iowa previews is Simpson College whose head coach Nate Hansen is looking to return his entire squad from 2015, with 125 being the only spot needing filled (it was an open weight for Simpson last year). Despite the team returning nine starters, expect to see some changes in the lineup, and as usual, just because you held the spot last year doesn’t mean it is yours this year.

One of the big names that should be returning to the lineup is Jonathan Melton (149), who finished fourth at the Division III Regional tournament, one win away from being coach Hansen’s first ever NCAA qualifier. He lost to a former high school teammate in the third-fourth place match, and he had actually beaten his teammate earlier in the tournament in the quarterfinals.  Melton is part of a young core for the Simpson team, as he is just a sophomore.

Two other sophomores returning from last year are Devan Berrian and Zach Johnston who appear to be flipping spots in the lineup with Berrian going to 141 and Johnston coming down to 133. Berrian hails from the famous Brandon high school in Florida, whose coach Russ Cozart has produced numerous college wrestling stars across all levels. Johnston came to Simpson out of Norwalk, and after  starting out at as a 125 recruit, he may have grown into 141 for the coming year.

Rounding out Simpson’s lightweights should be a trio of true freshmen that coach Hansen was able to bring in this last season. 125 has been a tough weight for coach Hansen to try and fill, but hopefully between Deven Acevedo (Florida), Jacob Irwin (Texas), and Chase Erickson (Ankeny, Iowa) one wrestler will emerge to give Simpson a full lineup for the 2015-16 season.

Ottumwa native and former Eddyville High School standout Brett Roberts (174) will look to come into his own and close out his Simpson career with a NCAA appearance. Roberts has been one of the most consistent wrestlers for Simpson the past three seasons and has the greatest winning percentage on the team for each of the last three seasons.

Fellow senior Spencer Ward (184) is another senior that has really thrived under Hansen and will hopefully be able to continue his progression for Simpson. After just a handful of wins in each of his first two seasons, Ward broke out to nearly 20 wins in his junior campaign and will look to cap off his career by being another Hansen NCAA qualifier. He will be pushed by newcomer Damon Piatt from Carlisle High School, who was a 170 Iowa state qualifier this past season.

At 197 pounds we could have an interesting race between three wrestlers. The incumbent is Eric Quador who had a fairly decent freshman campaign for Simpson. A big addition to the program just might be Grimes native and former DCG standout Blake Wolenski, who transferred into the program after spending his freshman season at Iowa State. A freshman, Scott DeVaughn who was a Texas state finalist could also prove to be an interesting name at this weight.

Big man and hometown wrestler Colby Vlieger should have the heavyweight spot locked up. Vlieger is the only heavyweight listed on the roster, so he should have a size advantage on his in-room competition.

That leaves the last two weights 157 and 165 to fill out the rest of the lineup. Returning starters Jake Mize and Bryce Wignall could be the two men back in the lineup for Simpson, but there still remains a possibility Wignall could go down to 157 for this season. If Wignall does stay up at 165, look for incoming freshman Garret Jay from Grinnell to challenge Mize for the starting spot. Jay took fourth at the 2015 Iowa high school state championships.

Looking over the roster coach Hansen has to feel pretty good about being able to have all nine of the wrestlers who competed in post season action for him last year to be back to compete for a spot in this year’s lineup. With three incoming freshmen at the lightest weight, Simpson should also field a full lineup for the first time in several years. Add in some talented freshmen and transfers and Simpson truly is a program that is #OntheRise.