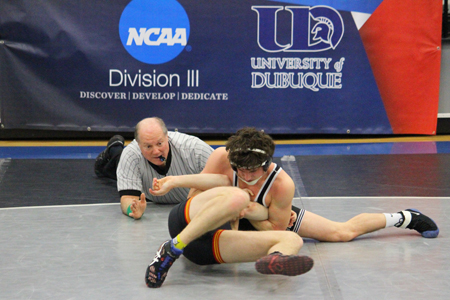 Up next in our 2015-16 Division III Team previews we will take a look into the University of Dubuque, which is led by a former DIII standout himself, Jon McGovern. Coach McGovern will be entering his 13th year at the helm and this coming season he will have some work to do with six of his 2015 starters leaving due to graduation.

We will start with the returning starters and the top two returning starters might be seniors Stephen Rosenburg (141) and Elton Turnage (174) who each took fifth at the 2015 DIII Central Regional last year. Despite losing twice at that tournament, Rosenburg’s only loss was to Nick Steger, who would go on to place fifth at the NCAA championships. After losing to Wartburg’s Brandon Welter, Turnage was eliminated from NCAA contention by Coe All-American Ryan Harrington in the consolation semifinals. Turnage amassed over 20 wins this past season for Dubuque.

Another returning starter for Dubuque is sophomore Joey Cisneros at 125 pounds. After taking sixth at the Central Regional in 2015, we will see what kind of improvements he has made to get him to the next step. Cisneros was an impressive 28-12 in his freshman campaign, and will hopefully be able to improve his record with the help of former Iowa standout Mike Mena as his lightweight coach. Mena helped coach two wrestlers at Indiana to Division I titles, and judging from the talent Cisneros displayed as a freshman, Mena may have found his next lightweight star.

Senior Kody Krenz (149) is the other returning starter for Dubuque. Last year, Krentz finished the season 9-11 going 0-2 at the Regional tournament.

With six spots needing replacing, McGovern has quite a few interesting options that could enter his lineup and a pair of them might just be coming from the Junior College ranks. At 197 pounds Ellsworth Community College transplant Sharrod Wilson will look to try and make an impact on the DIII scene after qualifying for the NJCAA national championships. Labette Community College transfer Nolan Smith is expected to compete for the heavyweight spot, after going 1-2 at the 2015 NJCAA championships.

A sort of surprise pick for Matt Leveille’s replacement at 184 pounds is former two-time state champion Ethan Soderstrom of Wisconsin. Soderstrom started his career with two straight titles in the Kohl Center in Wisconsin, before an injury derailed his junior season at 170 pounds, This past season as a senior Soderstrom wrestled all the way up at 220 pounds, but we have reason to believe he will be working back down to 184 pounds and if he is back to being fully healthy, he could be one of the biggest additions to the weight class on the DIII level.

It’s hard to replace a team captain like Brian Travis (157), but Adrian Collier or Michael Neal look best fit to try and look to do so for the coming season. Collier will be a senior for Dubuque and is up from 149 from a year ago (and 141 as a freshman). Neal was the 152 pound 2A fifth place medalist at the 2015 Iowa High School state championships.

Two more transfers could fill out the remaining two spots with Jon Denikus coming from Harper to take the 165 pound spot, and Rudy Johnson of Loras coming in to take the 133 pound spot. Johnson will have to contend with sophomores Julio Chavez and Nic Meyer to win the spot.

It should be an interesting season to sit back and watch develop for coach McGovern and his Dubuque team. Any time you have to replace over half of your lineup, you have a tall task in front of you, but the four returning starters show plenty of promise and experience to take the next step forward. McGovern also may have gotten two quality upper-weights from the JUCO ranks that can propel his team back to a top 20 finish, of which he has had already four of in his time in Dubuque.

You can tweet your thoughts on The Dubuque wrestling lineup to @IAWrestle and @RossIAWrestle using the hashtag #D3wrestle.