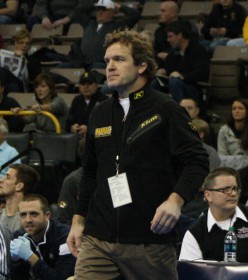 University of Iowa associate head wrestling Coach Terry Brands has been named USA Wrestling’s 2014 Freestyle Coach of the Year. This marks the first time that Terry has won the award, with his brother Tom winning the award twice in 2002 and 2003.

Brands, who also serves as a coach for the Hawkeye Wrestling Club, helped coach two wrestlers on to last year’s 2014 World Team. Tony Ramos (57 kg) made his first world team in 2014, earning the spot just a few short months after winning his first NCAA title for the Hawkeyes. Brent Metcalf (65 kg) earned what was his third stint on the World team last year. Both wrestlers won their Trials weight class finals in two consecutive matches.

In addition to placing two wrestlers he personally coaches on the World team, Brands also helped coach former Hawkeye NCAA champion Matt McDonough to the U.S. National Team, as McDonough took third at 57 kg. McDonough also went on to earn the University National spot for USA and then later won a bronze medal at the University World Championships. Thomas Gilman (55 kg), who just wrapped up his sophomore season as an All-American for the Hawkeyes, earned a bronze medal at the Junior World Championships.

Terry was an Olympic bronze medalist for USA back in 2000, and also won a pair of World titles in 1993 and 1995. During his time as a competitor for USA, he served as an assistant coach for the University of Iowa from 1992-2000. Brands then left to serve as an assistant coach at Nebraska (2000-01) and Montana State-Northern (2001-02), before landing the head coaching job at Tennessee-Chattanooga.

He led the Mocs for three seasons, until 2005 where he left to become USA Wrestling’s National Freestyle Resident Coach and Assistant National Freestyle Coach from 2005-2008. While serving on USA Wrestling’s staff he coached former Hawkeye Bill Zadick to a World title in 2006, and Henry Cejudo to an Olympic gold in 2008. Brands then returned to Iowa in 2008, and was promoted to associate head coach in 2011. Brands now has 17 years of coaching experience with Iowa.