McDonough ready to go the distance in Madison 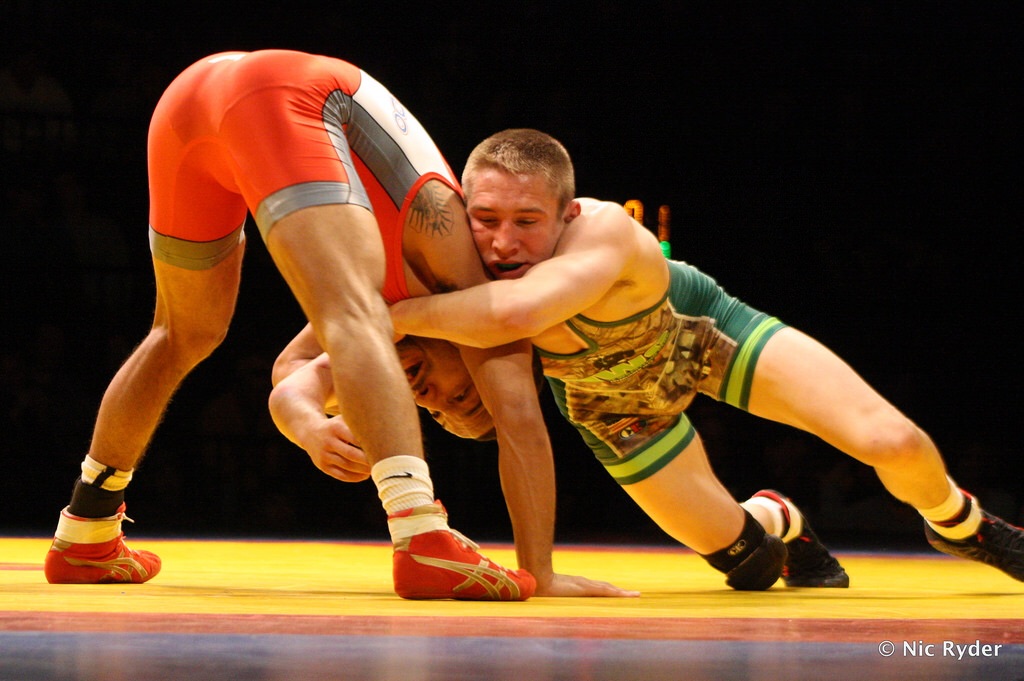 Since the 2013 wrestling season ended former Iowa Hawkeye Matt McDonough has been working to get back to where he is used to being. On top of the podium.

Since his freshman  year at Linn-Mar high school in Marion, Iowa McDonough has been one of the best wrestlers in his age group. After winning three state titles, McDonough went to the University of Iowa where he went on to be a two-time NCAA champion winning 122 matches (and a 93% career winning percentage). Having had so much success in the Hawkeye wrestling room, McDonough elected to stay in Iowa City to do his training for the next step in his career, freestyle and Train with Tom and Terry Brands at the Hawkeye Wrestling Club. Since joining the club he has earned a few international medals, including one at the 2014 World University Championships in Hungary last summer.

Last month, McDonough had worked himself all the way to number two in the United States rankings, and entered the U.S. Open as the #2 seed. After getting upset in the quarterfinals, McDonough fought his way back and finished fifth to clinch his spot at the World Team Trials, “Coming in as the number two seed and finishing fifth kind of speaks for itself.” McDonough told us in an interview. “I didn’t wrestle up to my potential and a few mistakes cost me a significant amount throughout the tournament. Anytime you come in expected to be in the finals and fall back to fifth you arent happy. So I have work to do in the next two weeks leading up unto the Trials.”

Throughout McDonough’s career he has had some battles with a number of wrestlers. Most notably in college he went back and forth with Northwestern wrestler Brandon Precin. Just a few short years after their last college encounter, Precin knocked McDonough off at the 2014 World Team Trials, preventing him from ever having a chance to make the World Team. McDonough was able to return the favor to open the U.S. Open, “Having a tough first round match has a plus side and down side, but in the end it really doesnt matter because to be the best guy you have to beat everyone in the bracket at some point.”

“With that being said I felt a lot better after finishing my match against Precin this year in Las Vegas as opposed to last year in Madison where I suffered a first round loss at the Trials.  Overall though, yes, I would absolutely say having such a tough first round opponent helped me prepare for my matches later on in the tournament.”

Although McDonough did suffer a couple losses at the Open, he still managed to pick up some big wins over the likes of University Nationals champion Tyler Graff, and former Junior national champion Nathan Tomasello of Ohio State.

“Every win you have adds to your confidence and helps you to prepare more for the future. On some of those occasions my wins were not pretty, however the difference was wrestling the entire six minutes. If I can iron out some minor adjustments in my wrestling to eliminate unnecessary points against me, and continue to battle for the entire six minutes I feel very confident I can improve upon the wins I gathered at the U.S. Open.”

McDonough recognizes that no performance is without in need of adjustments, and wrestling for the Hawkeye Wrestling Club provides him an asset that only a few in the country can lay claim to, “I have the best coaches in the country in Tom and Terry Brands. Everyday I’m getting reminders of what I need to mentally reflect on in my wrestling outside of the room and Everyday I’m getting hands on instruction with those positions.”

In addition to receiving help from Tom and Terry Brands, McDonough has another asset that has been preparing him for his next shot at making a World Team, “Dan Dennis is a great addition to the room. I wrestled on the 2010 NCAA title team with Dennis my freshman year and going back to a situation where we are both training together for the same goal is awesome. He’s got a lot of positive energy and he brings another aspect to the Iowa Wrestling room.”

This year USA Wrestling has decided to limit the participants at the World Team Trials to eight. When asked if a limited field would allow him to formulate a game plan for each individual wrestler he may end of facing McDonough had this to say, “With a smaller World Team Trials field there is definitely an aspect of being prepared for your opponents specific areas of expertise, but I don’t really think you need to game plan individually for each opponent. Tough wrestling wins World and Olympic titles, not strategy. What I mean is whether I wrestle Graff, Colon, Ramos, or Hoschstrasser I’m going to need to wrestle were I am most effective in order to win. Something could change in a match and you could have a totally different feel from the last time you wrestled someone. It’s important to know your opponents, but at the same time dwelling on what you can’t control won’t help you either, so for me improving my wrestling and fine tuning my areas of focus is most important right now.”

McDonough is fully focused on bringing home a gold medal Madison, and through that get the opportunity to wrestle at the World Championships, which will be held on U.S. soil in Las Vegas. Wrestling on home turf is something McDonough loves to do and it is also a reason he is really excited for the Olympic Trials next year as well, “I had the pleasure of wrestling in the 2012 Olympic trials held in Iowa City and it was amazing. It’s HUGE that we get to have them back here in Carver-Hawkeye Arena again. It’s one of my favorite places to wrestle and knowing that I’ll have to go through Iowa City to get to Rio is all the more exciting.”

The 57 kg bracket is expected to be a battle in Madison. Despite the fact that Ramos hasn’t lost to an American opponent since graduating from the University of Iowa, the bracket just feels open.  Ramos has had plenty of tight matches, and McDonough has been training for his opportunity to make the World Team, “It means a lot every single year to be the USA representative at 57kg. I’m sure everyone else at the weight class wants to be that guy too so it’s just a matter of fighting for your place on that U.S. Team.”

2 thoughts on “McDonough ready to go the distance in Madison”