Bobby Telford to continue his career with Hawkeye Wrestling Club 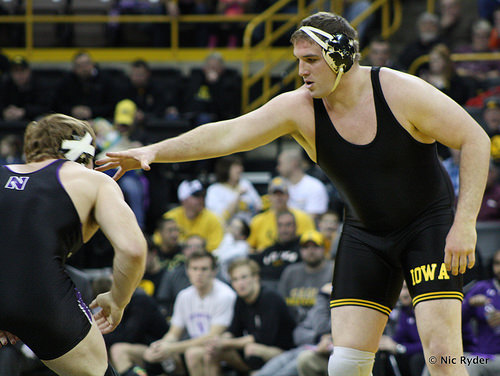 Some “big” news in Iowa City! Hawkeye All-American Bobby Telford will be continuing his wrestling career as part of the Hawkeye Wrestling Club. Telford was a three-time All-American for Iowa during his career, with his best performance coming as a junior when he finished fourth. Telford will join current Hawkeye Wrestling Club members Phil Keddy (86 kg), Matt McDonough (57 kg), and 2014 World Team members Tony Ramos (57 kg) and Brent Metcalf (65 kg).

“I have always wanted to wrestle on the international level. Wrestling in the HWC allows me to train in the best wrestling room in the world with people I have surrounded myself with for the last 5 years. Being in Iowa City gives me the best surroundings and atmosphere for training and achieving my goals.” Telford told us.

“I haven’t wrestled much freestyle over the past three years. My freshman year I won the FILA junior national freestyle championship. Since then, the rules and the format of the matches have changed drastically to enhance the action in the match. The training, coaching and philosophy at the University of Iowa gives me the edge to push the pace during a match and maximize my opportunities to score. My style is pushing the pace and staying aggressive throughout the match which will give me success at the freestyle and international level.”

One of the biggest influences on Telford the last two seasons has been volunteer assistant coach Ben Berhow who joined the staff back in 2013. “Berhow is a great workout partner for me and has been there for me for the past two years with anything I need in terms of training. He is a great guy to be around when you are on the road.”

Telford came to Iowa from St. Mark’s in Delaware where he was a two-time state champion and All-American. Following his outstanding prep career, Telford moved to Iowa City and along with teammate Mike Evans became head coach Tom Brands’s sixth and seventh three-time NCAA All-Americans. Telford placed fifth as a freshman and senior and fourth as a junior. Had it not been for an unfortunate injury as a sophomore, Telford might have been a four-time All-American for Tom Brands. Telford also never finished lower than third at the Big Ten tournament, and made the finals just once as a freshman.

Telford is expected to compete at the 125 kg (heavyweight) for the Hawkeye Wrestling Club. Not too long ago Telford was ranked in USA Wrestling’s January rankings, Telford came in at #10 on the rankings –  which was the highest for any active collegiate wrestler aside from two-time NCAA champion Nick Gwiazdowski.