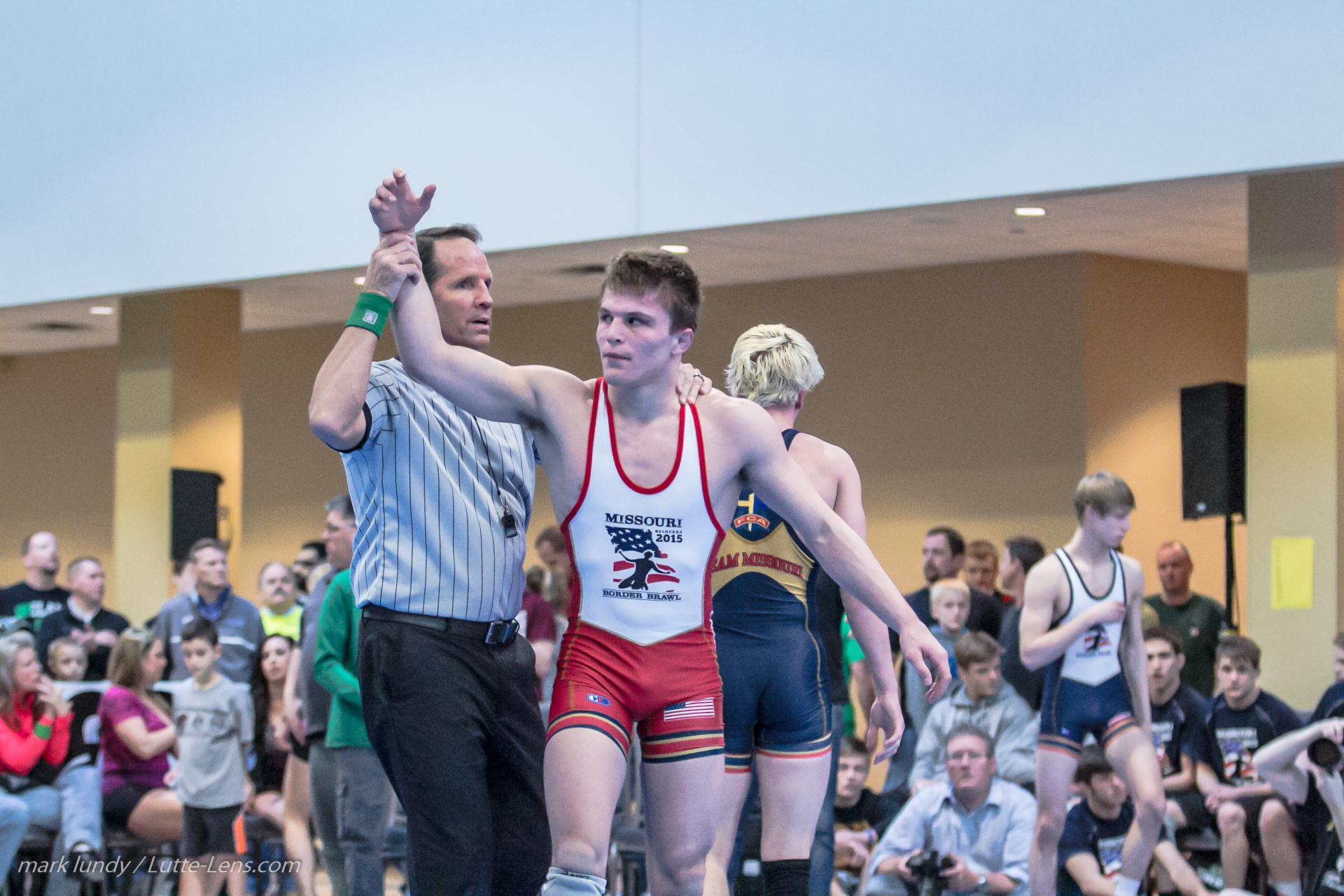 With the state tournaments wrapped up for all seven UNI commits (of which ALL won a state title), I thought we could take the time to reflect on what the class will be bringing to the table for Doug Schwab and his Panther team. It is important to remember that you not take that I am just giving or anointing these recruits as starters for the team in future, but for the purposes of this discussion I will be referring to some/most as future starters. I have talked with several of these recruits through interviews and know that they are coming to UNI with the intent of starting, so I am going to equal their mindset in the following post.

Taylor Lujan, a four-time state champion out of the state of Georgia is probably Doug Schwab’s biggest recruit in the 2015 class (and it’s nice that he’s also the biggest weight wise as well). Lujan comes in as a consensus top 50 recruit, some have him in the top ten, some have him in the top 20, 30s… etc. Point being is that Lujan was a big name to commit to the Panthers, rumor has it that Zeke Jones was even recruiting Lujan (which is saying something given the talent Jones did bring in). Despite wrestling in a non-traditional power-house wrestling state*, Lujan has the credentials, winning a Super 32 title earlier this fall. Perhaps most impressive was how Lujan made his 11-5 finals win look so easy, at what is considered one of the top preseason tournaments in the country.

Along with being a top recruit, it appears that Lujan will also fill a team need, which makes his recruitment that much more important. Currently Cody Caldwell and Kyle Lux have each made starts at the 184 spot this season and both are juniors, which means Lujan could step into the lineup as a redshirted freshman on day one. Lujan will certainly bring a lot to the table for UNI and much like his future teammate Josh Alber (133) his redshirt progress will be one of the most interesting secondary storylines for next season.

*I’m not bagging on GA wrestling, I know they have produced some good ones; they just don’t quite have the rich history the Midwestern states have built up.

If Lujan is the #1 recruit in this class, Max Thomsen is 1A, he may not be ranked as high as Lujan was by some (not ranked by any in the top ten), but is definitely a top 50 prospect and after his win over nationally ranked Fredy Stroker this season he could be as high as a top 20 recruit. Thomsen recently finished up becoming Iowa’s 24th four-time state champion and hold the career wins, consecutive wins, and total pins all-time records for the state. Thomsen graduates with a 210-1 record, was a Super 32 runner-up and was selected to the Dapper Dan Classic Team USA. There is no doubting Thomsen’s talent, and he certainly looks like an excellent addition that should thrive under Schwab’s tutelage.

Thomsen won his final state title at 145, and while some wonder if he could be a future 141, I have him pegged as the future 149 for the Panthers. The only thing working against Thomsen is that his weight will feature several returning upperclassmen standing in his way when he is ready to take the mat for UNI. Gunnar Wolfensperger (would be senior) and Tyler Patten (senior) have both wrestled at this weight class and don’t appear to be going anywhere. In fact Wolfensperger’s progression from a year ago has landed him plenty of praise from UNI fans who have watched him develop. Thomsen will have to battle for his spot, but he certainly has the talent to be an important cog in future Panther lineups.

He may be the smallest recruit of the class, but Bettendorf’s Jacob Schwarm is a two-time state champion and has pushed himself into the top 20 of weight class rankings after dominating the 3A class. Schwarm won’t bring in as many credentials as Lujan or Thomsen, but his high school senior class alone has produced four division one wrestlers (and that could go to five if Dayton Racer ends up at a division one school), so he’s no stranger to tough competition. His workout partner junior Jack Wagner, is ranked in the top 20 of his weight class rankings.

Schwarm will be a contender for the 125 starting spot, once All-American Dylan Peters graduates. To start next year, Schwarm will be one of four 125 wrestlers on the roster, with the other notable being Leighton Gaul, who is getting starting experience wrestling up at 133 this season.

157 is an interesting weight class as it looks like Schwab has brought in two talented wrestlers in top 100 recruits Bryce Steiert and Paden Moore. Steiert is considered a top 50 recruit and defeated the already mentioned Dayton Racer to claim the 160 pound 3A title at Well Fargo last month. Moore is a familiar name because his brother Cooper is in his second year starting for the Panthers.

Both have mentioned in interviews with us that they intend to challenge for the 157 (presumably because Cooper should still have 165 under lock and key as he challenges for All-American honors), so both will try and fill the vacancy that Jarrett Jensen will be leaving with his graduation. Their biggest obstacle on the roster would be Zach Witte, a former top 100 prospect himself. Right now it looks like a three-way battle and it probably won’t end there. After the two 2015 recruits redshirt freshman season, they will be able to spread out to 157 and 165 with Cooper’s graduation. The question is which wrestler will go where and if both feel that 165 may be a more comfortable weight we could get some more battles. What’s the saying? Iron sharpens iron. It’s clear that these two will be fantastic workout partners which will only strengthen the team.

As if the future battle between Steiert and Moore won’t be exciting enough, Schwab also added two top 20 wrestlers from the 170 high school weight class. #13 Jacob Hoschlag and #15 Isaiah Patton both appear destined to create a terrific room battle for the 174 weight class. Both wrestlers were also stars on the football field, so the athletic ability is there for both, but as of now Hoschlag holds the edge considering he won the Preseason National tournament in Cedar Falls this last Fall.

There will be competition for sure. Adam Drain, a former Mediapolis standout, has enjoyed a fairly successful season wrestling up a weight at 184. Assuming Drain hasn’t moved up for good, Schwab has a nice collection of talent battling for that spot and as I mentioned with the previous two recruit, iron sharpens iron. No future starter will be able to get too comfortable, because Schwab has made it apparent that he not only wants to bring in quality talent – of which this class has plenty – but he is also looking for quantity in the form of depth.

The third Moore Brother, Keegan will also be an interesting target for Schwab in the upcoming year. It’s not for certain that he will end up in Cedar Falls, but Schwab certainly has a nice family feel that his brothers have taken to, maybe Keegan will feel the same. The third Moore brother is cut from the same cloth in that he enjoys a lot of success on the football field. What sets Keegan apart is that he appears to be a step ahead of his brothers in wrestling talent, just this past summer he was a Cadet Freestyle and Greco-Roman national champion at Fargo. The second thing that sets Keegan apart is the fact that he already weighs 182 – where he is already ranked #4 at his weight. Being that he is a football star, and doesn’t mind adding the weight, it’s conceivable that Keegan goes up to 195 for the next season (which we already saw him at for Postseason Folk nationals), and becomes a 197 recruit. At 184 he would have to battle with Lujan.

The state’s top get –

Carter Happel is an interesting case for this offseason. Much like Iowa’s 2015 #1 recruit (Stroker), no one is certain what decision he will make regarding his college decision and it adds a nice level of excitement. Happel recently won his third Iowa state title, and is a multiple national champion in freestyle so his appeal is rather apparent to even the common fan. Happel can scrap. When you consider he set a season takedown record for Lisbon (a school that has produced numerous four and three-time state champions) you have the combination for a big recruiting target and he’s an instate addition.

Likewise I think the appeal for Schwab would be pretty obvious for a wrestler like Happel, who projects at 141 or 149. It’s obvious that Schwab brings a high level of intensity and anyone that has ever listened to Schwab talk usually wants to throw their wrestling shoes on and get on the mat. Schwab has the program on the upswing, and they recently brought in four-time state champion Max Thomsen, who would make for an excellent practice room partner. Time will tell what the young Happel decides, but all three Iowa programs will have their eye on him.