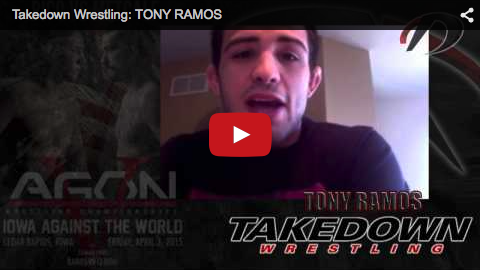 One of the biggest bouts on the AGON card for this weekend features another past vs future matchup. The past is Henry Cejudo, the last lightweight medalist for USA. Cejudo was an Olympic gold medalist back in the 2008 Olympics in Beijing coached by current Hawkeye coach Terry Brands. The future being Tony Ramos, who made the 2014 World Team right out of college at the newly established 57 kg weight class.

Ramos will be the favorite in this matchup, currently ranked #1 in the USA and ranked #19 in the World by UWW. In college Ramos was a takedown machine for the Hawkeyes where he was a three-time All-American at 133 pounds including a 2014 NCAA title season. Given Ramos was so dominant on his feet, he rarely had to display any defense, which was one of the question marks experts had when he entered the freestyle scene. Ramos responded by beating Angel Escobedo at the World Team Trials where the former 5th place finisher was unable to penetrate on any of his shots. Ramos is on the larger side of his weight class, which gives him a noticeable strength advantage making it hard for opponents to get to his legs, and when they do Tony shows off his scrambling ability to not allow points.

Cejudo is a different tale. Now entering his late twenties, Henry is almost seven years removed from the days of his Olympic title where he became the youngest gold medalist in USA Wrestling history. Instead of taking the normal route where the elite wrestler goes to college, Henry elected to train at the Olympic Training Center where under the tutelage of Terry Brands he eventually won his title. Cejudo then exited the sport, making one brief return at the 2012 Olympic Trials where he failed to make the team and has since been training to be a UFC competitor. Cejudo is coming off a fight from March 14th, so it will be interesting to see how much time he has been able to put into his freestyle training and how recovered his body is from his bout.