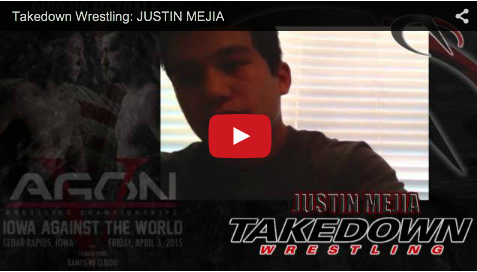 It’s the battle for the #1 ranking at the 113 pound weight class – Hawkeye bound and #1 ranked Justin Mejia will look to defend his title against Illinois’ #2 Austin Gomez. Both wrestlers bring a host of accolades and signature victories, which is the reason for them being so high on the list, but tomorrow night it all gets settled on the mat as Mejia and Gomez will be part of the high school elite matches leading up to the former Hawkeye wrestlers at AGON V.

Mejia’s accent to the top spot was well earned. A two-time state champion from California is a force to be reckoned with and when you add to it that he is one of a handful of wrestlers to accomplish winning two titles to start a wrestler’s first two years of high school. Mejia picked up a key win over future teammate Jason Renteria (OPRF) which boosted him to #2 in the rankings this year. A loss at the Dapper Dan by Jabari Moody was the finial nudge to the top spot of his weight. Mejia focuses mainly on folkstyle these days, but in his early years of wrestling he trained almost exclusively in freestyle.

Austin Gomez is a bit of a different story. He did everything he was supposed to, winning both Greco-Roman and Freestyle Cadet national titles at Fargo this past summer. He sat in the top five rankings and slowly made his way up aided by losses from Devin Brown and Moody. A win over Renteria in the state finals would put Gomez directly behind Mejia for the top spot. This battle should favor the Illinois native, as he is one of the nation’s top lightweights in freestyle.