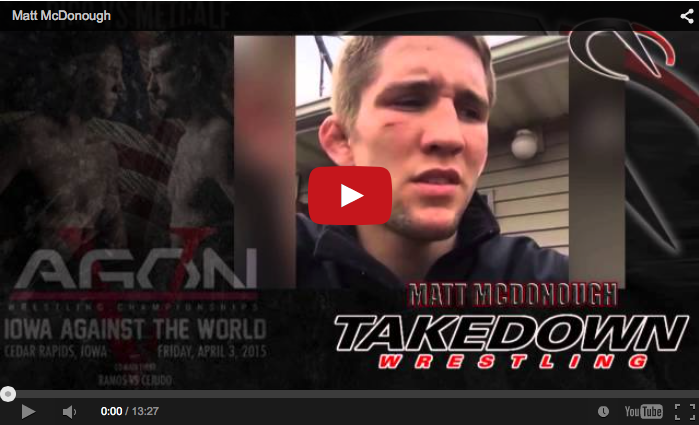 A rematch that has been five years in the making, going back to the 2010 Big Ten finals. As a freshman young Hawkeye wrestler Matt McDonough was making waves on the Division I wrestling scene. After coming to Iowa as a projected 133 pound wrestler, McDonough dropped to 125 to wrestle varsity as a freshman. Given his size/length some fans wondered how his body would handle the cut. Those thoughs were soon put to rest as he burst out to a 32-0 start to his career, which included a Midlands title and his first trip to the Big Ten finals.

That was the first time Matt McDonough and returning NCAA champion Angel Escobedo faced off. It was a battle for the ages, the freshman phenom going up against the returning champ. The kind of match young wrestlers and fans alike dream about, having a chance to see what is deemed the impossible. McDonough’s perfect season was left on the mat that day, as Escobedo left with the Big Ten title after a 6-4 decision over the freshman, it appeared that Matt’s time had not yet come.

Two weeks later, another freshman from Iowa, Andrew Long knocked Escobedo off at the NCAA championships robbing McDonough his chance of redemption to beat Escobedo. Matt went on to beat Long 3-1 to capture his first of two NCAA titles in what would be a run of three straight finals appearances. Escobedo received shoulder surgery, and would later represent Team USA at the 2013 World championships falling a win shy of a bronze medal.

So here we are in 2015. Escobedo is just two years removed from his 5th place finish in Turkey, and McDonough who made the National team by finishing 3rd at the 2014 World Team Trials. McDonough also added some hardware to his mantle, by winning a bronze medal at the 2014 World University championships, losing only to the future gold medalist. AGON has finally given us the opportunity to see if McDonough can get his revenge, or if Escobedo will once again prove to be just too much for the Iowa wrestler to handle.