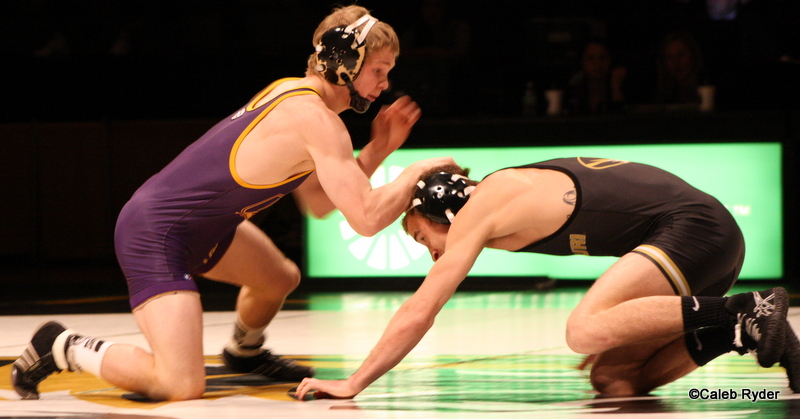 The MAC has released their tournament pre-seeds, and like our B10 preview, we’ll be previewing all ten weights for the conference. Since the tournament only has eight wrestlers in each weight class, I’ll post who I think will be in the semifinals and then the finals. I’ll also list who I think will qualify for the NCAA’s based on the number of qualifiers at each weight.

Panther outlook: Dylan Peters earned the number two seed after defeating all his MAC opponents, except Alan Waters. In fact, all of Peter’s losses have come by way of wrestlers ranked in front of him nationally. Peters has pretty much run through the rest of the MAC, only winning by decision twice while picking up three pinfalls and one tech fall along the way. Peters will get the man he beat by tech fall in the opening round, Ohio’s Zak Hassan. That win will probably set up a rematch with Old Dominion’s Brandon Jeske, who Peters most recently defeated 8-3. That will be a battle for the sophomore, but I would expect Peters to make it to the finals for a rematch with Missouri’s Alan Waters.

The rest of the MAC: 125 pounds has really been a three-horse race all year with Waters, Peters, and Jeske ranked 1, 2, and 3, respectively, all year. Waters has seen the gap between first and second grow however, as he went undefeated on the year (27-0), and defeated Peters by major decision, 10-1. Neither of Water’s potential semifinal opponents have see him yet, Northern Illinois’ Derek Elmore and Central Michigan’s Brent Fleetwood. I would expect the huskies to earn the win in the opening round to go on to face Waters in the semi’s. Although it may be win by decision, I expect to see Waters in the finals.

Panther Outlook: Leighton Gaul has a tough road to make it to the finals. A more natural 125 pounder, Gaul was asked to fill in for Levi Wolfensperger, who suffered an injury early in the year and was forced to sit out his senior season. Gaul is 8-16 on the year, including 3-5 in the MAC, and he’ll have to avenge some losses to qualify. Right off the bat is Eastern Michigan’s Vincent Pizzuto, who won by pinfall over Gaul in their only match. If Gaul can get the win there, he’ll probably have to face the two seed in Tyler Keselring, whom Gaul lost to 5-1 in a dual match earlier this year. I can see Gaul getting some revenge on the backside of the bracket, against Mack McGuire, but unfortunately the MAC only gets one auto-bid at 133.

The rest of the MAC: Zach Synon gets the one seed here, and he is by far the most highly ranked MAC wrestler. However that doesn’t tell the whole story. Synon is 27-11 on the year (with two losses to UNI’s freshman Josh Alber) and hasn’t faced the four seed Mack McGuire, the three seed Pizzuto and only beat the two seed Keselring by one, 2-1. If McGuire gets by Kagan Squire (the two haven’t met this season) I can see him knocking off the one seed in the semifinals. As for the bottom of the bracket I like Pizzuto to get by Gaul and then get a win back on CMU’s Keselring to make the finals.

NCAA Qualifier – one at 133: The winner of the final match (I’m not predicting the finals winner)

Panther Outlook: This is the first weight where I’m not really sure how the Panther will end up. I could see Jake Hodges making his way to the finals or bowing out in the first round. If the pre-seeds hold up Hodges will get Kent State’s Tyler Small in the quarterfinals, which isn’t necessarily a good matchup for him. Small won by major decision in their dual a few weeks ago, blanking Hodges 10-0. If Hodges can get by Small he’ll more than likely take on #1 Zach Horan, who only beat Hodges in a close 3-2 decision in a dual at Central Michigan. I like Hodges to get the win over Small in the quarterfinals, and then drop the rematch with Horan. He’ll have the opportunity to wrestle back for third, where I think he’ll first face off against Tyler Argue, a win for him there would put him in the third place match, most likely against ODU’s Chris Mecate. That will be tough one for him to come out on top of, and I’m predicting Mecate to take home third.

The rest of the MAC: This is a tough weight to predict. From the 4-5 seed matchup in the first round, to the possible 1-4/5 and 2-3 matchups in the semifinals, it will be a fun weightclass to watch. Mayes and Mecate had a close match back in November during their dual meet, but Mayes has really come on strong to close the year out, including wins over three top 20-ranked opponets, two by major decision and one (against Iowa’s Josh Dziewa) 13-6. A lot of Horan’s matches have been pretty close, and he’s lost some of those as well (he is 17-4 on the year). I think Horan and Mayes reach the finals.

Panther Outlook: Gunnar Wolfensperger is tied for UNI’s lowest seeded wrestler (Curt Maas is #7 at 174) so he’ll have his work cut out for him at 149 pounds. Luckily the MAC has five auto bids at this weight, so he’ll have a good shot at making the NCAA field. If the pre-seeds hold up, he’ll get the number two wrestler in Alexander Richardson from ODU. Wolfensperger and Richardson missed each other this year at the teams dual meet,UNI wrestled Tyler Patten, which they had done for many duals this season, and Richardson scored the major decision against the backup. I think Wolfensperger drops his first match, but then gets a win over Mike Depalma, who won by pinfall over Wolfensperger earlier this year to get at least a chance to wrestle for fifth and a chance to make the NCAA tournament. He would face Tywan Claxton in his second wrestle back match for the chance to wrestle for third, in a match that Wolfensperger could win. I think he drops that match though, but defeats Eastern Michigan’s Nick Barber in the fifth place match to punch his ticket to the NCAA’s.

The Rest of the MAC: Number 1 Drake Houdashelt is the top of this weight class, and I don’t necessarily see anyone beating him. He’s won all but one of his matches this year, and has scored bonus points in six of his last nine. #2 Richardson lost a close, 3-2, decision to him, but that was back in November. Richardson will have to go through Colin Heffernan to get to Houdashelt though, and that will be tough battle. Both men are ranked about the same, with Richardson holding a 5-2 decision over Heffernan back in January. I think Richardson gets by him and makes the finals. Since the MAC gets five wrestlers at this weight, we have to go a little bit deeper. I think #4 Tywan Claxton gets the win over #5 Nick Barber in the opening round, and Barber will win his first wrestle back against Northern Illinois’ Austin Culton. I see Barber dropping a close decision to Heffernan to wrestle Wolfensperger for 5th place.

Panther Outlook: If you would have told me before the season that Jarrett Jensen would be the three seed in the MAC, I’d probably wouldn’t have believed you. In fact I said that 157 would be UNI’s weakest weight this year, and boy was I wrong. Jensen has really exploded in the MAC, defeating number one Ian Miller at Kent State has been the highlight so far, but he has expectations of reaching the NCAA’s. He’ll have a tough first round opponent in Andrew Morse, who has a win over Jensen this year 4-0. I expect Jensen to bounce back from that loss though and move on to rematch with number 2 Joey Lavallee from Missouri. That was another loss for Jensen, a 2-0 decision. Again I expect Jensen to learn from that first match, not get rode out of an entire period, and pick up the win to advance to the finals.

The Rest of the MAC: Number 1 Ian Miller has some losses on the year, including the aforementioned loss to Jensen. I expect him to get past his first two opponents this year, the first being ODU’s TC Warner, and either number 4 Cody LeCount or number 5 Brandon Zeerip, who he beat by a combined score of 24-6 this year. I think that Lavallee and Lecount wrestle back from semifinal losses to this third place match, where Lavallee will eventually get third and qualify for the NCAA Tournament.

We’ll have the rest of the MAC Tournament preview posted tomorrow. Drop a comment below if you like my predictions, or leave several comments if you don’t!