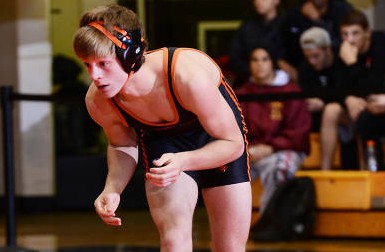 Former Iowa City West Trojan Jack Hathaway has qualified for this year’s NCAA tournament by clinching the automatic birth when he won the 133 Pac-12 title this past weekend at Gill Coliseum, Oregon. Hathaway was one of three freshmen to claim a title for Oregon State joining fellow lightweight Ronnie Bresser (125) and Cody Crawford (197) on the top of the podium.

Hathaway cruised to a 25-10 record this year, winning his last four matches coming into the Pac-12 tournament earning him the #1 seed in the 133 pounds. (bracket) After a first round bye he defeated Cal Poly’s Jason De La Cruz in the semifinals with a first period fall to advance to his first Pac-12 finals. He defeated Stanford’s Connor Schram 4-0 to win one of five Oregon State conference titles on the weekend. Hathaway is now 27-10 on the year and is unranked by InterMat.

Hathaway is coached by former Iowa high school wrestler and ex-Hawkeye head coach, Jim Zalesky. Zalesky was a star for Cedar Rapids Prairie, and wrestled at the University of Iowa before becoming the head coach at his alma mater after Dan Gable retired.  Oregon State captured it’s sixth conference title under Zalesky, and will send seven to the NCAA tournament.