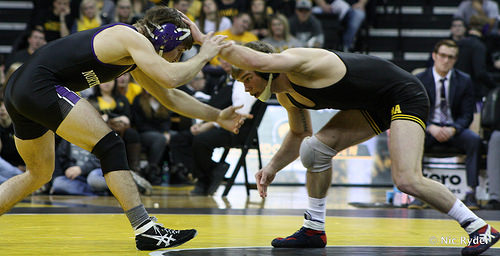 Moving on to the second set of weights, Eric breaks down the 141 weight class, and I share my thoughts on the 149 bracket.

Hawkeye Wrestler Outlook: For the most part Josh Dziewa has put together a pretty solid season. He has beaten most of the guys he was supposed to and lost most of the guys ranked ahead of him. Dziewa may not light up the scoreboard, but he is consistent in close matches. It is a fairly safe bet to say the top two seeds at this weight class will reach the finals, but after that the race is wide open for 3rd.

Logan Stieber, Ohio State (21-0) vs Steven Rodrigues, Illinois (14-8)
These two have not met up this season. Look for Stieber to roll into the finals and get a rematch with Dardanes who Stieber beat 10-9 in their last meeting.

Josh Dziewa, Iowa (24-6) vs Nick Dardanes, Minnesota (19-2)
To get to the Semis Dziewa will have to get past the 3 seed, Abidin from Nebraska. The two did not meet up this season since Nebraska had a softer big ten schedule than usual. The schedule worked out that Nebraska avoided Iowa, Penn State, Minnesota, and Ohio State. Should Dziewa get to the semis he will have Nick Dardanes of Minnesota. The two met up at the end of January where Dardanes won by a 7-3 decision. If Dziewa wrestles well he can challenge for 3rd, but this semifinal will more than likely be won by Dardanes.

Hawkeye wrestler outlook:  Brandon posted an undefeated conference record earning him the No. 1 seed at this weight class in his first season in the lineup.  Brandon will likely be looking at a quarterfinal matchup with Rylan Lubeck (Wisconsin) who has yet to defeat a ranked wrestler this year.  Look for Brandon to advance to the semis while putting up bonus points along the way.

Prior meetings this year – Sorensen defeated Theobold by 18-5 major decision at the dual in January.

Preview of match – Look for Sorensen to establish a high pace from the get go in this one.  The hawks will be looking for bonus points out of Brandon to keep pace in the team race.  Don’t be surprised if Pantaleo (Michigan) knocks off Theobold in the quarters.  Pantaleo wrestled Brandon to a 2-1 match at Carver just last month.

Prior meetings this year – None

Preview of match – This will be Hunter’s first competition since defeating Zach Beitz back on January 11th.  Tsirtsis always seems to slow down the pace and is a great top position wrestler when the match is on the line.  I think Hunter can give Jason a match if he is heeled from the injury that has sidelined him most of the year.  Unfortunately for him I think it is going to require surgery. I will take Tsirtsis in OT.