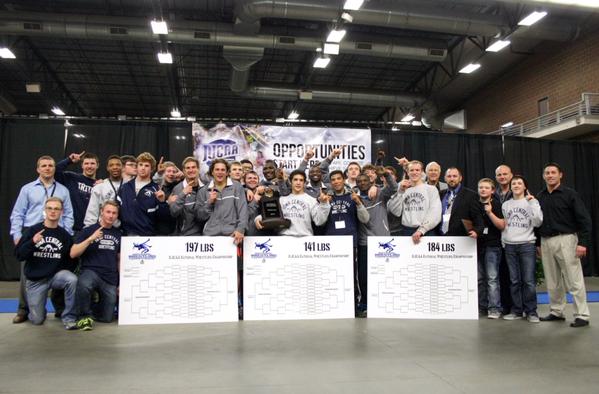 Iowa Central College wrapped up the NJCAA national title in dominating fashion, as all three of their finalists went on to capture individual titles to finish off Central’s strong tournament. Leading things off for Iowa Central was Jason Alfau who defeated Jake Marlin 5-2 in the 141 finals to claim the top spot. Marlin has enjoyed plenty of success in Des Moines going back to his days when he was a four-time state champion for Creston. Marlin enrolled in the University of Iowa, but then transferred to NIACC to train closer to another four-time state champion, TJ Sebolt.

Iowa Central then scored an upset in the 184 finals, when #3 ranked freshman Tyler Hoffman stuck #1 Matt Hurford of Ellsworth in the final period to win the title. Hoffman’s teammate Patrick Downey finished off the sweep with a 9-5 decision in the 197 finals to extend the final team score by more than 25 points over Clackamas.

The finals started off in exciting fashion as #1 Alfredo Rodriguez of Iowa Lakes and #6 Deshun Brown of Ellsworth traded leads throughout the finals match, but it was Rodriguez who came out on top in the end with a 10-8 decision and a NJCAA title.

Following his teammates loss in the 141 finals, Nosomy Pozo (NIACC) came out and defeated Iowa Western’s Oscar Ramirez in the 149 finals by pinning him in the with under 20 seconds left in the match to earn a title for NIACC. NIACC’s Yoanse Mejias was the team’s third consecutive finalist and he won 4-3 over Dajour Reece (Clackamas) in the 157 title match.

Eight of Iowa Central’s ten qualifiers for the tournament ended up on the stand, with all eight of those wrestlers winning their last match of the tournament. 3rd place om the team race NIACC finished with five total All-Americans. Iowa Westerns also finished with five All-American’s and finished just inside the top ten for team race. Despite only having three All-Americans Ellsworth finished ahead of Iowa Western for 7th place in the team race. Matthew Rodriguez-Kirkland taking 4th, and their two finalists was enough to carry Ellsworth over their Iowa college rival. Rounding out the Iowa colleges was Iowa Lakes, who finished 12th with just two All-Americans. For a more indepth look at how the consolation All-American wrestlers did, see this post.