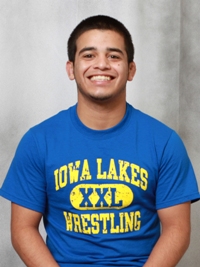 With the Division I wrestling tournament wrapping up last month it makes sense that the NJCAA wrestlers will now be off selecting their colleges to continue their wrestling careers. According to InterMat’s Josh Lowe NJCAA 125 pound champion Alfredo Rodriguez of Iowa Lakes Community College has selected the University of Oklahoma as where he will be spending the last two seasons of his eligibility.

Rodriguez is a two-time national champion for Iowa Lakes and was even named the Outstanding Wrestler of the North Central Regional. At the NJCAA national tournament, Rodriguez tore through his bracket winning by fall, major decision, and technical fall to reach the finals against Ellsworth’s DeShaun Brown. There he downed the former top 100 recruit 10-8 to capture his second title.

Rodriguez will face some tough competition when he gets to Oklahoma as he will need to unseat the incumbent freshman Ryan Millhoff, who was the 2014 #25 prospect according to D1wrestling.net. Millhoff had a rough first season going 16-13 including losing his last six matches. It’s conceivable that the addition of Rodriguez means that Oklahoma is planning to redshirt Millhoff, or possibly another scenario could feature NCAA champion Cody Brewer bumping to 141 which would also allow either Millhof or Rodriguez to take over 133. Just some speculation, but there could be an opening for Rodriguez right away in Norman.