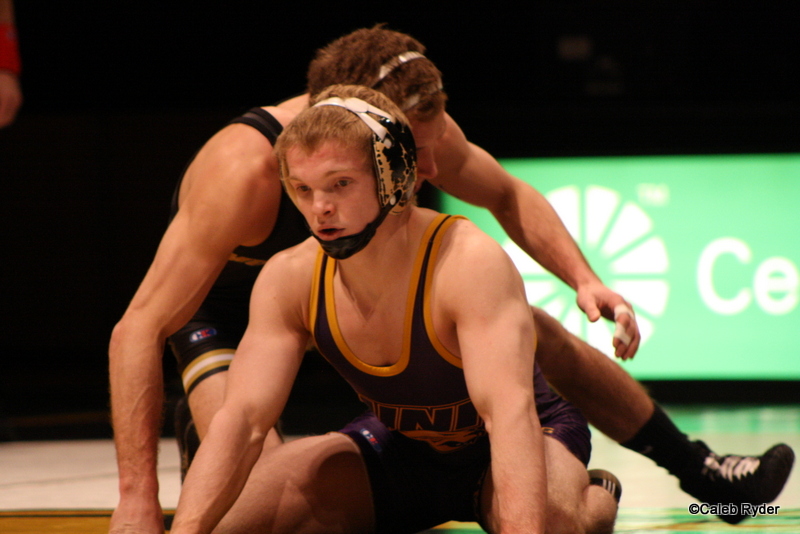 Northern Iowa continues it’s road trip this weekend, going to Kent, Ohio, to take on the Golden Flashes this Sunday at noon. Kent State is 7-3 overall, and 3-3 in the MAC. UNI will take on another MAC opponent Ohio University tonight.

UNI will bring in three nationally ranked wrestlers, while Kent State will bring two. At 157 KSU has the number two wrestler in the nation in Ian Miller, who was last years MAC Champion and was fourth in the country at the NCAA tournament. The Golden Flashes also bring in #18 Caleb Marsh at 174 pounds.

The Panthers three ranked wrestlers are the three that have been ranked all year. Leading the way again is #6 Dylan Peters, who will take on Kent State’s Del Vinas. Peters is 2-0 against Vinas, winning by major decision and pinfall last season.

#12 Cooper Moore will tilt with Tyler Buckwalter, who placed fifth at last years MAC tournament. Moore will need to continue to develop his offense with a limited right arm, and while Buckwalter will be a tough opponent, I wouldn’t be surprised to see Moore come out with a little more offense than we’ve seen the last couple weeks.

The current MAC Wrestler of the Week and #10 in the nation at 285 pounds in Blaize Cabell gets Mimmo Lytle. Lytle isn’t ranked, but he is undefeated so far in MAC competition (he received a forfeit at Missouri against Deven Mellon, so he has no upset victories) and will be a good opponent for Cabell to continue working on his offense.

As for the rest of the matches it’s really more of the same from the Ohio and Central Michigan duals. UNI will be looking for a win on the road in MAC competition, something that hasn’t happened yet this year (pending on how they handle Ohio tonight) and Coach Doug Schwab will be looking for UNI to be the more aggressive team.

At 133 Leighton Gaul has a chance to get back on the winning side of things, taking on Mack McGuire. McGuire is 21-11 on the year, but he’s had a fairly successful run in the MAC, winning against Missouri’s backup at 133 Matt Manley earlier this year, but dropping his two most recent bouts against Eastern Michigan’s Vincent Pizzuto and Central Michigan’s Tyler Keselring (both of whom have beaten Gaul this year as well). McGuire is the third ranked wrestler in the MAC.

Jake Hodges should be on the mat at 141 pounds for UNI. He’ll take on Tyler Small, and it would be a good match for Hodges to start a run going into the final two duals of the season and the MAC chamionships. Small is 25-10 on the year, with most of his losses coming in the last month (7-7 in January). This is a match that I would look for Hodges to win.

Last week we saw Tyler Patten go at 149 pounds at Missouri instead of Gunnar Wolfensperger, but it should not matter on Sunday. Both Patten and Wolfensperger should defeat Mike DePalma, who is 14-17 on the year. This would be a good win for either of them to, again, get something rolling come late February and March.

It will be interesting to see how both Cody Caldwell and Basil Minto bounce back from losses last week. Caldwell lost by pinfall to Missouri’s Willie Miklus in just 0:24, while Minto lost by major decision to defending NCAA champion J’den Cox 16-4. Caldwell hasn’t been wrestling well of late, dropping three in a row, so he’ll look to get things turned around. Minto has been wrestling better lately, going 5-1 in his last six matches, but as I’ve said before he hasn’t put a full match together. He needs to stay aggressive in the third period, and develop one or two more shots that he has confidence hitting.

The dual at Kent State will be available online at this link, while you can listen to the dual on the Golden Flashes Radio Network available on iHeartRadio.com. We’ll have a full recap of the dual up either Sunday or Monday, and we’ll post results and tweet them out as we get them!