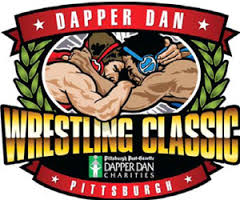 Bettendorf’s Fredy Stroker and Union’s Max Thomsen join a prestigious group of Iowa wrestlers selected to Team USA for the Dapper Dan Classic. This is the most prestigious high school all-star wrestling meet in the United States. They join a group of 23 other Iowan’s selected to the team and become just the 4th pair of wrestlers to represent Iowa.

Max Thomsen received a call Monday evening that he had been selected to wrestle 145lbs for Team USA. He currently is 193-1, which is 14th on the all time Iowa win list. He carries a 43-0 season record and is looking to become the 24th four time state champion.

“This is an honor to represent Iowa,” Thomsen said. “This is a huge opportunity to get a potential rematch with Michael Kemerer. Kemerer has been on my mind since he beat me at Super 32.”

Thomsen will likely wrestle Michael Kemerer, whom is ranked No. 1 by Intermat and will further his career for the Iowa Hawkeyes.  Pennsylvania has traditionally picked the state champion at each weight to represent the PA All-Stars and Kemerer is the heavy favorite. In their only matchup, Kemerer defeated Thomsen by a 9-4 decision at the Super 32 finals.

Fredy Stroker got his call Sunday night asking him to represent Team USA at 152lbs.

“This is a great honor to be a part of The Dapper Dan Classic. I used to attend the classic as a young kid dreaming of being on Team Pennsylvania.” Stroker said. “Now that I represent Iowa I have a great opportunity to be on Team USA.”

Stroker currently carries a 181-4 career record with 127 pins. He’s 37-1 this season with 31 pins and two technical falls. Currently he is number seven in the all time pin record but can’t catch the top two who have 140+ pins. Stroker should end his career in the top for falls in his high school career.

Stroker will likely take on Penn State recruit and No. 2 ranked wrestler in the nation at 152lbs, Vincenzo Joseph. These two wrestled twice in 2014 with Joseph winning 8-0 in the quarter finals at Fargo and winning their most recent match at FLO’s Who’s #1 Event by decision 3-2.

“I’m excited to have the opportunity to wrestle either Duggan or Joseph again. Joseph has my number but I had an opportunity to beat him at Who’s #1. I want to have that opportunity for revenge before we move on to our college careers.”

Thomsen and Stroker wrestled each other at the Keith Young Open in December and match lived up to the hype. Some may say the lack of scoring made it less exciting, but when you have two wrestlers of this quality it is tough for them to get through each others head/hands defense. These two will go down in history as some of the most decorated wrestlers of all time. Unfortunately we will have to wait until college to see these two potentially wrestle again. Thomsen is headed to the University of Northern Iowa and Stroker is headed to the University of Minnesota.

“I have been fortunate to be part of the FLO’s Who’s #1 event twice but there is nothing like the Dapper Dan Classic.” Stroker said. “This is the most prestigious high school event. What makes this extra special is I get to attend the event with a fellow Iowan Max Thomsen.”

After talking to these two it is very apparent that they respect each other greatly and they plan to start training together immediately after the state wrestling tournament. Between the two of them they could end their high school careers with seven state titles.

We will update you when we have more details on Team USA and the PA All-Star Team.