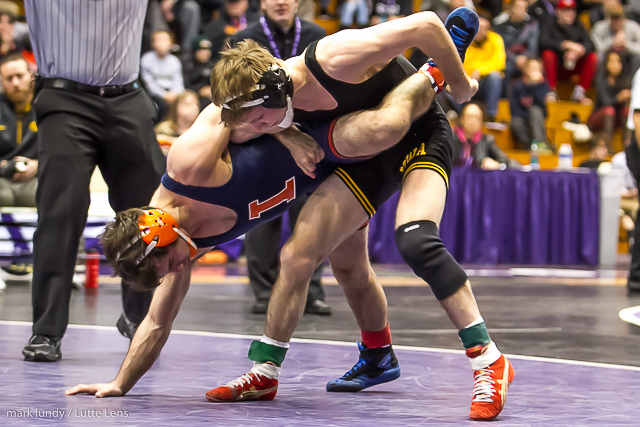 Who: #2 Iowa vs. #9 Illinois
Date: Friday January 16th, 2015
Time: 7:00 PM
Location: Carver-Hawkeye Arena – Iowa City, Iowa
Radio: 800 KXIC AM
Online:A BTN video stream will be available online at btn2go.com on BTN Plus.
Play-by-play: IA Wrestle will be providing a play-by-play post for this dual, for a review of what that looks like see this post from the Michigan State dual in December.

The Iowa Hawkeyes return to Iowa City after a busy past few weeks on the road. Their road trip consisted of a Midlands title, two top ten dual victories, and another Big Ten conference win. Friday, they will face their third straight top ten dual team in Illinois, with the winner leaving with their unbeaten conference dual record in tact.

This dual is setting up to have quite a few good individual matchups, with the potential for four top ten matchups (which includes two Midlands final rematches) and possibly seeing two weights with a top ranked wrestler in action.

125 has a very intriguing matchup with #5 Thomas Gilman possibly getting a chance at returning NCAA champion Jesse Delgado, although the Illinois wrestler has only wrestled two matches this year and none since November. Gilman won the previous meeting against Delgado, when he won their Midlands semifinal match 3-1 over a year ago. [UPDATE: The big news here is that Jesse Delgado will NOT be in the lineup for the #9 Illini. Had he wrestled it would have been a tough match for Gilman, but now with all signs pointing to Delgado still not going to wrestle, look for Gilman to go out and try and work for bonus.]

If a rematch does not happen and Dominic Olivieri goes for the Illini, expect Gilman to continue his momentum from the Oklahoma State dual, where he majored #10 Eddie Klimara. Thanks to Cody Goodwin (Daily Iowan), we know that Gilman has forced 18 pushouts in his last two matches, and I expect he will be looking to continue to put points on the board for the Hawkeyes.

At 133 we may get our first Midlands final rematch with #5 Zane Richards looking to get revenge on Midlands champion Cory Clark. The Hawkeye earned a tight victory (4-2) in the last meeting, and I would expect a similar result this time around as well.

Senior #8 Josh Dziewa will be looking for revenge of his own at 141 against #13 Steven Rodrigues, who won their Midlands battle 3-1 over the Hawkeye. Dziewa got back on track last weekend by picking up a fall over Dean Heil and will look to continue his success after going through a stretch where he lost three matches in a row.

Big Ten Wrestler of the Week, Brandon Sorensen continues to climb in the 149 rankings, as after the defeat of Oklahoma State’s Josh Kindig he finds himself in at #3 in the rankings. Kyle Langenderfer has earned the starting spot in the last two Illinois duals and I would expect to see Sorensen to replicate his results from the last two weekends and “continue to build” as coach Brands would say.

Mike Kelly (157) will look to continue his climb in the rankings as well, after debuting at #16, he is up to #15 after his 9-6 win over Collica last Sunday. Friday he will get a shot to improve his ranking, as well as a shot at redemption with #5 Isaiah Martinez who defeated Kelly 16-5 at the Midlands.

Last weekend Tom Brands opted to go with junior Patrick Rhoads at 165, as opposed to senior Nick Moore who has manned this weight for the last two seasons. Even though Moore would come in the underdog in this match, Moore has beaten #8 Jackson Morse in the previous season and one would hope that would be the Nick Moore that steps on the mat Friday. If Brands rolls with Rhoads look for the junior to wrestle a much better match than last weekend (it ain’t easy going up against a wrestler like Dieringer).

At 174 we may see our second Midlands finals rematch between #2 Mike Evans and #6 Zac Brunson. Evans won a tight 2-1 decision at the Midlands, but we really saw him open it up in Stillwater with his 16-1 technical fall over Jordan Rodgers. It served as a good reminder as to how much of a hammer Evans is in the top position.

Sammy Brooks (184) will look to get back on track against #20 Nikko Reyes after falling to Nolan Boyd 9-6 last weekend. Sammy did have a 5-1 lead, but after a throw put him on his back he fell behind and never recovered. I think Brooks will be sending a strong message that he is looking to correct his mistake from the Oklahoma State dual.

Nathan Burak (197) is now up to #4 in the rankings and he will look to continue his perfect season against Jeff Koepke. Burak notched his 50th win on Sunday over Oklahoma State’s Luke Bean.

Bobby Telford is continuing to show he is deserving of the #1 285 ranking as he collected his fifth win over a top 15 opponent (it was 10 until Smith dropped down) in a row. While Brooks Black may not be ranked, he was at one time the #1 ranked 285 recruit out of high school so this should be a very fun match.

2 thoughts on “Hawkeyes return to Carver to face #9 Illinois”