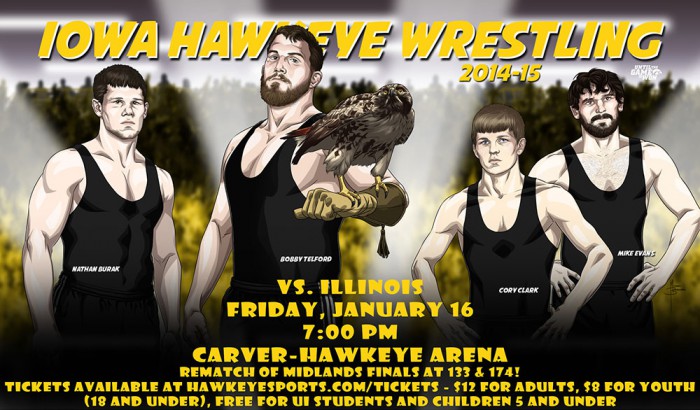 I also want to try and make this interactive, so I will be updating the “Sound Off” portion. I’ll ask a question, and you drop a comment.

SOUND OFF
#1 – Where is everyone following along from?

Dual is starting at 125 (Lineup below reflects weigh-in sheet)

125: #5 Thomas Gilman vs Dominic Olivieri
1st:Here we go with Gilman, they start out doing some hand fighting and Gilman is trying to work the head too. Little touch and go and Gilman finishes for 2. Escape for Illinois (2-1 IA) Gilman with a pushout.
RS: Gilman still working the head and tries an outside single, doesn’t go, switches to a shot on the left and finishes for two, (4-2 IA) escape, Illinois, Gilman in again. And he finishes (6-2 IA). Gilman rides out.

2nd: Gilman goes optional start and Illinois wrestler is out (6-3) Gilman with 1:01 RT. Slide by from his knees and Giman scores two, then cuts his guy. Hits another takedown with in seconds (10-4 IA). Escape Illinois, and they restart. Gilman hits a takedown, Illinois warned for stalling (12-5 IA). Finishes the period with a ride out

3rd: Gilman takes down, Illinois throws both legs in, Gilman trying to shake him off, stalemate.
RS: Illinois tries to throw in the legs on a stand up and Gilman catches, the leg, stands up and hits a reversal, then cuts his guy. Scores another takedown (16-6 IA). Gilman picks up a stalling point, flips his guy to his back but gets no NF!! Match ends

133: #4 Cory Clark vs #5 Zane Richards
1st:Both guys doing some fighting, Richards gets in on a shot and gets Cory on his seat, he gets the TD, Clark scoots around and is out (2-1 IL). Richards hits a high crotch and scores another TD, Clark is out (4-2 IL). Clark and Richards working for control, the circle back center, but the period ends.

2nd: Clark takes down. Clark is out in under :10 (4-3 IL), Clark going to need a score here to get back in this match. Clark working a collar tie and takes a shot but doesn’t get anything. Richards had double underhooks, but he works out of it. Richards doing a good job of defending any attempt Clark makes, and staving off Clark working to get control, it ends (4-3 IL).

3rd: Richards down and he gets out. Richards was in on a shot, but Cory fights it off and in a front headlock on their knees. Stalemate they go restart, Cory with another attempt, and then another, he gets behind Richards for a HUGE Takedown. No wait they wave it off, but Cory gets back in on a shot and get’s it that time 5-5 score! Cory cuts him and it’s 6-5, Richards hit with stalling. They restart, Richards with a lot of backing, but they don’t call stalling..

Doing some after match talking, Brands just about ran to the spot the 2nd official was at, he was going to call stalling for the refs. Man that match has me feeling all sorts of out of mix.

141: #8 Josh Dziewa vs #13 Steven Rodrigues
1st:Dziewa supporting the leg sleeve tonight. Neither guy really tying up. Not really doing anything now that they are tied up, just some pushing. Now they are working the head some, trying to actually improve their hold. Dziewa tyring to work a snap to a front headlock, but no go. Rodrigues finally takes a shot, but Dziewa is in decent position. Stalemate.
RE: Not much here, still scoreless.

2nd:Rodrigues taking down. It doesn’t matter what Illinois does to night, they are going to hear it from this crowd tonight after 133. Dziewa rides for :22 and Rodrigues is out (1-0 IL). Just circling each other, Dziewa hits a really good looking duck under, but nothing there. Rodrigues in on a leg again, but Dziewa has some real good defense, they get back to their feet. Rodrigues on another shot, this time about has a double. Period ends with just the escape.

3rd:Dziewa is out so it’s 1-1. They are tying up, working collar ties. Dziewa’s first shot has him deep on a single, but Rodrigues had a good whizzer, Dziewa works around for 2, and Rodrigues gets out (3-2 IA). Rodrigues in again, but they stalemate with :08 left. Dziewa warned at the end.

149: #3 Brandon Sorensen vs Kyle Langenderfer
1st:Sorensen in on a shot, and got a little sloppy so gets takendown, he gets out quick and gets right back in on the attack (2-1 IL). Sorensen hits a shot on the edge, but loses it and they go OOB.
RS: Sorensen working the head with some heavy pressure. Another shot attempt by Sorensen (half shot), Illinois back away quite a bit, but Sorensen still looking for openings. :30 seconds left. Gets in on another shot, but Illinois, maybe not a shot, but he’s getting to the legs. There he finishes (3-2 IA) .

2nd:Illinois starts down and Sorensen is going to ride him a bit. Imagine that the crowd wants stalling ;). Sorensen just applying pressure, Illinois tries to stand up, but he’s getting pushed down, he’s got his 1:00 RT now. Illinois is let go (3-3). Sorensen hits another TD with :30 left (5-3 IA).

3rd:Sorensen is down. He gets out, still got his RT point. Sorensen got out on a Standup. Sorensen gets an underhook and just about gets to the leg, the go OOB.
RS: Sorensen gets in on another shot, Illinois tried to roll through and he just about caught him on his back. Escape Illinois (8-4 IA) , adds another and gives up another Escape on the edge. 10-5 with :33. Sorensen in on the leg, gets a stall warning (on Illinois) he doesn’t finish. Guys are getting a little chippy. Illinois gets Sorensen in the eye

157: #15 Mike Kelly vs #5 Isaiah Martinez
1st:Here we go in this Midlands rematch. Martinez hits a throw, Kelly rolls through, but that TD came right away. Kelly is up and out (2-1 IL). Kelly is tying up with Martinez too much thrown to his back and gives up near fall (6-1 IL). What I should say is that Kelly is getting in too close allowing Martinez to hit that throw, Kelly is out (6-2 IL). Martinez hits another TD 8-2 IL lead with 1:11 left. Cleaning up some blood.
RS: Kelly is out 8-3 IL, and Martinez blasts through another TD (10-3 IL lead). They go out.
RS: Kelly actually takes a shot of his own and kind of gets to a leg, but they go back to neutral. Martinez with another throw, TD and NF (14-4 IL).

3rd:Thomsen is taking down. Morse cuts (8-1 IL) and he gets in on shot, Thomsen defends and the stalemate.
RS: Morse in on a shot right away. Thomsen warned for stalling and Morse adds two more as he has both legs and Thomsen on his seat. (10-1 IL). Dinged again for stalling, 11-1 IL with :37 left. Can’t tell for certain, but doesn’t sound like Ironside likes the stalling. Just because Thomsen can’t get out doesn’t mean he is stalling. This one ends

174:Alex Meyer vs #6 Zac Brunson
1st:Brunson with a quick two, and he is working to try and turn, Meyer is bellied out. Gets back to his base, but Brunson has a leg in and breaks him down again. Stalemate.
RS: Meyer gets out (2-1 IL) and goes to work on his feet, working ties.Brunson in on the leg again, just about gets the 2, but Meyer gets a whizzer and fights it off. Good defense OOB. Period ends, Brunson has 1:03 RT too.

2nd:Brunson takes down to start. He gets to his feet and Meyer working to return, looks like he was about to get in trouble but he recovered, Meyer still on top OOB.
RS: Brunson catches Meyer’s leg they end up both on their feet (3-1 IL), Meyer got the RT down to :14. Nice work. Meyer taps the knee, but that’s about it for his half shot. Tries to snap Brunson. Period is going to end.

3rd:Meyer goes down. Crowd is really behind him! Up and out in :05, Brunson hits a shot and gets the TD (5-3 IL) after an escape. Meyer still looking really pulling on the head, trying to make attempts on the leg. Stalling called on Brunson, he’s just back away. Meyer really is going all out on his shots. Offcial warning on IL Bench. Meyer with a desperation shot and he GETS A FALL NO WAY!!!

184: #8 Sammy Brooks vs #20 Nikko Reyes
1st:Carver is rocking again. I thought it was loud when they were willing Meyer to win, big cheer for Sammy. TD in :11, Brooks is up. Escape Reyes (2-1 IA). A few additional notes, Grace was going crazy during the Meyer fall. Sammy is working his ties, Reyes isn’t giving him much, but Sammy is going with a good pace. Reyes was in deep. Who was the last wrestler to have such good balance and leg defense like Brooks has? He fights it off OOB.

2nd:Sammy starts down, gets to his feet returned. Back to his feet and out (3-1 IA). Brooks pulling on the head. Really trying to wear Reyes down. Brooks goes double unders drops to a leg and finishes on the edge (5-1 IA). Sammy rides out. Good period.

3rd:Reyes takes down, gets to his feet, but a nice return by Brooks. Reyes back to his base, but Sammy flattens him out. Brooks locks up RT. There is a stall warning on Reyes. There is another stall call, (6-1 IA).

197: #4 Nathan Burak vs Jeff Koepke
1st:Not much happening after 1:00, just both guys working a tie. Burak probably doing he most since he is actually changing levels. Still haven’t seen anything from Illinois other than reactions to Burak, he’s not backing out though. Period ends scoreless.

2nd:Koepke takes down, Burak lets him out Illinois now leads (1-0 IL). Again Burak the only one making an attempt to change levels, but he still isn’t committing to a shot. Burak only has :11 RT. Period ends with just the escape.

3rd:Okay to Burak is down an dd out in :07. Time to go to work (1-1). Illinois with their first real attempt, but they go OOB.
RS: With a :43 left Burak takes a shot, gets a single and brings it to his feet, hits a trip and he’s got a takedown, surrenders and escape (3-2 IA). Illinois got in pretty deep, but Burak kicked away.

285: #1 Bobby Telford vs Brooks Black
1st:Black doing a little face slapping, Telford pushes him out of bounds (legal, with pressure). Another OOB. Black giving some ground here. Another OOB, Brooks backing. Another pushout that’s four. Still no stall warning. Telford almost with a TD, gets another pushout. Almost pushout #6, but Black circled. Black warned for stalling with :25 left. It’s scoreless, but we know who’s being the aggressor.

2nd:Telford takes down, gets out and gets in on the legs, but Black backs out. 1-0 Telford lead here. I always thought Black was a bigger heavyweight in HS, but Telford really outsizes him. Telford takes a shot, Ironside asking for a “re-shot, re-shot”. There is another point Telford on stalling (2-0 IA). Period ends.

3rd:Black takes down, Telford puts a leg in and has Black bellied out. Telford just about had an arm bar. Ironside wanted it pretty bad. Another stall call (3-0 IA).

44 thoughts on “IOWA VS ILLINOIS PLAY-BY-PLAY”