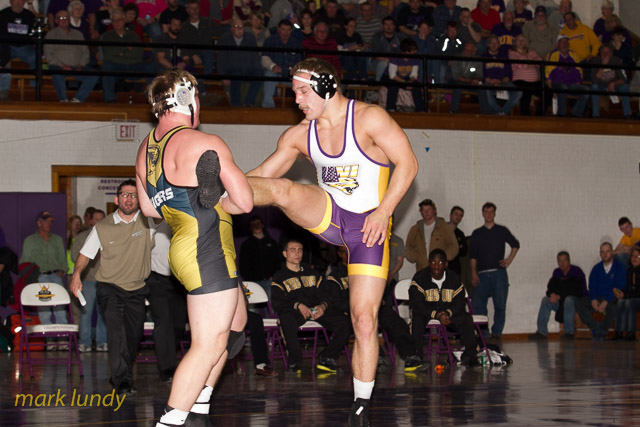 The Grapple at the Garden was this Sunday and UNI had a tough day going 1-2. The Panthers lost to Duke 21-16 in the first dual of the day, winning the four matches that they put men out there for. Cooper Moore did not wrestle at 165 in all three duals, so the Panthers forfeited that weight. If anybody was in the lineup for the dual against Duke they potentially could have won.

The Blue Devils came out a bit more ready to wrestle than UNI did; the dual started at 7AM Iowa time and the Panthers looked a little bit heavy-footed. On the positive side though Dylan Peters got the pinfall, Gunnar Wolfensperger looked solid in a 6-2 decision, Curt Maas kept climbing with a win and Blaize Cabell won by major decision.

The forfeit at 165 did the Panthers in though; with a win by decision there UNI would have won the dual 19-18.

The second dual of the day came against Drexel and UNI enjoyed more success against the Dragons than they did against the Blue Devils. The Panthers won seven of the ten matches; they again forfeited 165 leaving six points on the board for the opposing squad. Leighton Gaul ran up against Drexel’s only ranked wrestler in #15 Kevin Devoy, and the freshman from New Hampton went down 10-0.

Overall though the Panthers looked better than they did against Duke, although they were not scoring a lot of bonus points, and two of their matches, 149 and 174, came down to a riding time point to secure victories. With the exception of 133, 141 and the forfeit at 165 the Panthers swept the Dragons.

The biggest dual of the day was UNI against #3 Cornell. The Panthers ran into a buzz saw with the Big Red though, with only Blaize Cabell winning his match. The biggest match of the day saw #6 Peters go up against #2 Nahshon Garrett. Garrett imposed his style of wrestling on Peters throughout the entire match though. Peters could not set up his shots against the much taller and lankier Garrett. Peters dropped the match 6-2.

Cabell looked dominate in his match against Jacob Aiken-Phillips. The Panther scored on nearly every shot he took, even letting Aiken-Phillips up twice in the last 20 seconds of the third period to take him down again each time to secure the major decision. Cabell is the only Panther to remain undefeated in dual meets this year.

The Panthers have a bit of a break for the holidays before the dual season really ramps up. They have this week off and then get back to it next week before their second home dual meet of the season against Eastern Michigan. That dual is January 4th and starts at 2PM in the West Gym.

2 thoughts on “Cabell Leads the Way in New York City”