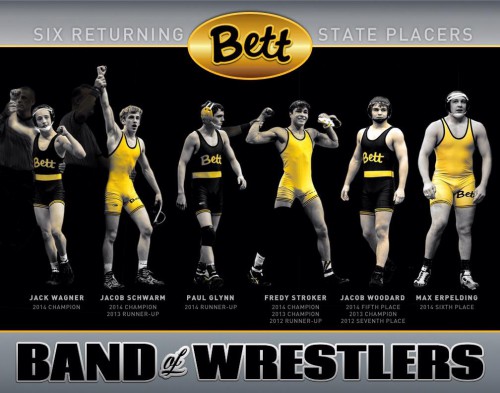 Yesterday held a lot of excitement for the Bettendorf Bulldog program as the second and third senior members of the 3A team title favorites announced their commitment to a division one program. First it was Fredy Stroker (Minnesota), then it was Jacob Woodard (Iowa), up next was the talented Paul Glynn. Glynn, who finished second last year at 120 behind top 100 2014 recruit Alijah Jeffery, was one of those wrestlers and we got to know him a little better.

How did you get involved in wrestling?

I got involved in wrestling because of my dad. He started me at about 5 years old in the Bettendorf Wrestling club.

What other school(s) were you considering?

The other schools I was considering were Wisconsin, West Virginia, and Missouri.

What made you pick Iowa over those schools?

I chose Iowa over these schools because Iowa felt at home for me. Also, my heart told me that was the best school for me. I also have a lot of support at Iowa. I have been working with Joey Slaton for the last two years, and he has helped me significantly with my wrestling. When I was deciding, Joey talked to me a lot about what Iowa could bring to me. I believed what Joey told me, and I also believed that the Brands and Coach Morningstar could get me to where I needed to be.

(We decided to go ahead and reach out to Slaton to get his thoughts on Paul):

Slaton: I’ve worked with Paul for going on three years now. The kid has come a long ways. He is the kind of kid that looks you in the eyeballs and responds. He is very coachable, and that’s why he has made the improvements he has in the last couple of years. He has a lot of upside and he has one more year of business left. I don’t think he will be satisfied with the last couple years’ [results]. He is a great kid off the mat too! It’s all him.

What weight are you planning on wrestling in college?

Is there a wrestler or coach in particular you are excited to work out with at Iowa?

I look forward to working with Matt McDounough and Tony Ramos at Iowa. I have known them for a while and they will be great workout partners for me at Iowa.

What weight will you be wrestling at this upcoming season for the Bulldogs?

Who has been your toughest opponent to face to this point in your career?

The toughest kids I have wrestled through out my high school career would have to be my teammates.

That Bettendorf squad is looking pretty tough, what is it like to be a leader on a team with some many good wrestlers?

I am beyond blessed to have such good workout partners at my school. It feels great to be a leader on the Bettendorf team. As a team we are all super close, and we are all brothers. I can’t wait for the upcoming season with them.

You won’t be the only Bulldog on the Iowa roster, the Ryan brothers are already in Iowa City, and your high school teammate Woodard also just announced his commitment. What is it like to know that you will be in a Division one college wrestling room and be surrounded by so many familiar faces?

It will be awesome being at a college with some of my high school teammates. It will make me feel a lot more comfortable about being [at Iowa].

Do you plan on competing in any preseason tournaments?

Preseason nationals is the only preseason tournament I’m attending.

Id like to thank my family for supporting me throughout my career, along with Coach Dan Knight and all my other coaches.

Anything else you want the Hawkeye fans to know about you?

To the Hawk fans, I cannot wait to wrestle at Carver in the future and I can promise you all that I will do everything in my power to be a great Hawekeye wrestler. GO HAWKS!!

One thought on “OVERTIME with Hawkeye Commit Paul Glynn”