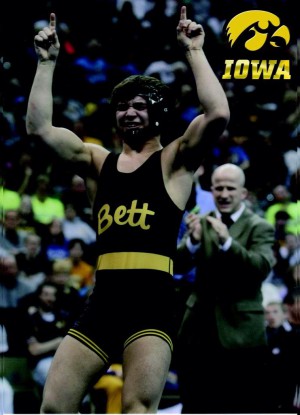 Yesterday held a lot of excitement for the Bettendorf Bulldog program as the second and third senior members of the 3A team title favorites announced their commitment to a division one program. Jacob Woodard was the first of the pair to commit as his teammate Paul Glynn made his announcement shortly after Woodard. Woodard was the 5th place finisher last year at 152, and was the 138 pound champion two seasons ago. We got to know the future Hawkeye a little better.

What made you pick Iowa over those schools?

The opportunity to work with the Iowa coaching staff. I think they can bring out the best in me. I have always wanted to be a Hawkeye, and I know I am going to fit in really well with the Iowa culture and wrestling style.

What weight are you planning on wrestling in college?

Is there a wrestler or coach in particular you are excited to work out with at Iowa?

There are so many great wrestlers at Iowa, but I am looking forward to rejoining my teammate Logan Ryan.

What weight will you be wrestling at this upcoming season for the Bulldogs?

Who has been your toughest opponent to face to this point in your career?

Coach Trizzino on the stairs.

That Bettendorf squad is looking pretty tough, what is it like to be a leader on a team with some many good wrestlers?

I’m blessed to have great teammates that push each other and hold each other accountable.

Do you plan on competing in any preseason tournaments?

Anything else you want the Hawkeye fans to know about you?

I am going to embrace the Iowa style wrestling and always be on the attack.