NCAA Champion Cox to face Schiller at the #NWCAClassic 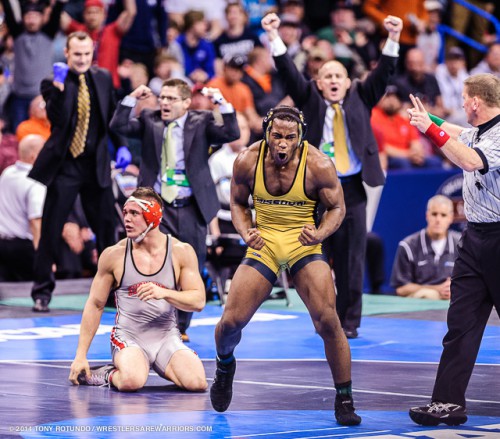 J’den Cox of Missouri had the best season any true freshman could hope for when last year he defeated Ohio State’s Nick Heflin in Oklahoma City to claim the 197 NCAA title. It’s not as if winning the title was unexpected. Coming into the tournament, Cox had only suffered two losses, one of which came by the way of Iowa State Kyven Gadson. Schiller is a two time All-American for Minnesota, and will be looking to defeat the reigning champion in what will be their first ever meeting in college.

Cox will once again be heading back to the Southern Scuffle in January, where he will have a chance to meet up with #3 ranked Gadson, who as I mentioned defeated Cox in overtime last season. Also, since Missouri wrestles in the MAC conference, he will have a chance to wrestle UNI’s 197 (Nic Ryder says that will be Bartel) to wrap up January (1/31).

Schiller will be headed to the Cliff Keen tournament in December, where could run into a UNI wrestler, or Gadson. #2 Schiller owns four wins over Gadson, but Gadson was also able to pick up a 6-4 victory over Schiller late in the year. Finally, Schiller will face Iowa either January 31st or February 1st in the Big Ten dual competition (the dual will be in Minnesota), and could pick up another encounter with Iowa’s All-American Burak at the National Duals in Iowa City.