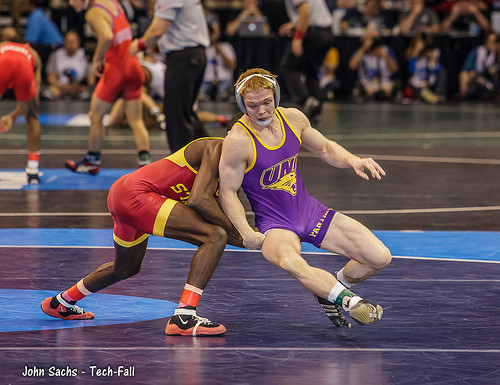 The Mid-American Conference coaches release their pre-season rankings Wednesday, and the Panthers earned five wrestlers in the top four. All five are looking to repeat as NCAA qualifiers this year and Dylan Peters (125 pounds) is trying to improve his spot on the podium after taking sixth last year.

In addition to being third, Caldwell is listed at 184, something that had not been confirmed until today.

In addition to the individuals being ranked the MAC ranked each school based on the number of first through fourth place votes that were earned. First place vote was worth four team points, second three points, third two points, and a fourth place vote was worth 1 point. Missouri was ranked first in the team poll with 27 points and Old Dominion was second with 18 points. UNI was ranked third with 15.5 points, and Kent State (13.5) and Ohio (12.0) rounded out the top five.

The MAC will not be an easy conference to win this year. Missouri, ODU, UNI and Kent State all return at least one All-American, and Missouri’s 197 pounder J’Den Cox became the ninth MAC wrestler in the history of the conference to place first at the NCAA’s. Ohio is looking to have a breakout year (ranked number 24 in the Associated Wrestling Press’s 50 in 50) with talent from 149-197 and Central Michigan will not go quietly into the bottom half of the MAC either.

The coaches of the MAC will vote on their top four every month throughout the year, with two polls going out in January and February. Here are the complete rankings in each weight class, as well as the complete pre-season team poll: