Dan Gable to Speak in Des Moines on Oct. 23 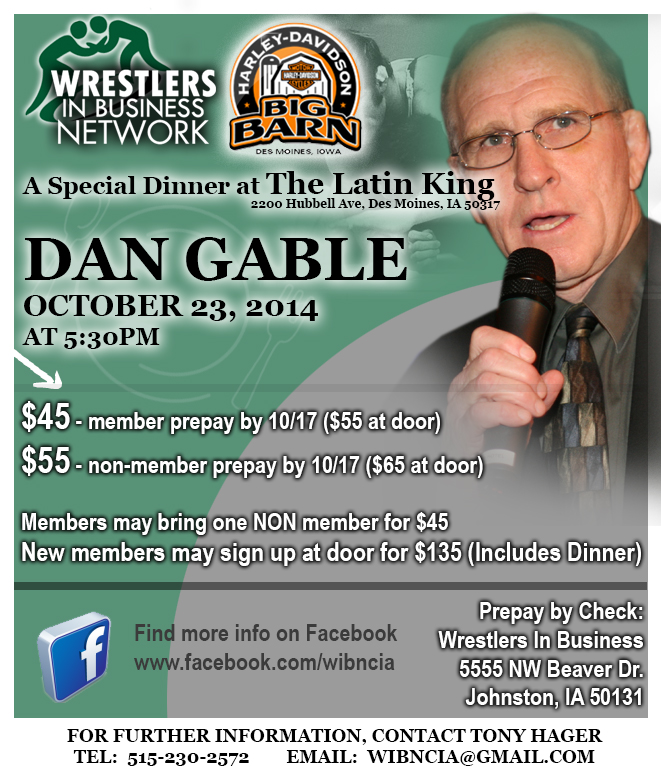 DES MOINES – Legendary wrestling competitor and coach Dan Gable will speak in a special arrangement at The Latin King at 5:30 p.m. on Oct. 23, 2014, hosted by the local Wrestlers in Business Network (WIBN) and sponsored by Big Barn Harley Davidson.  The Latin King is located at 2200 Hubbell Ave. in Des Moines.

During his prep and college wrestling careers, Dan Gable compiled a record of 181-1. He was undefeated in 64 prep matches, and was 117-1 at Iowa State University. Gable was a two time NCAA National Wrestling Champion and three-time all-American and three-time Big Eight champion. He set NCAA records in winning and pin streaks.

After college, Gable added titles at the Pan American and the World Championships and won a gold medal at the 1972 Summer Olympics in Munich, Germany, without surrendering a single point.

As the University of Iowa’s all-time winningest coach from 1976 to 1997, Gable won 15 NCAA National Wrestling Team Titles while compiling a career record of 355-21-5, He coached 152 All-Americans, 45 National Champions, 106 Big Ten Champions and 12 Olympians, including four gold, one silver and three bronze medalists.

Prepayments for the event can be made by check and mailed to Wrestlers In Business Network, 5555 N.W. Beaver Drive, Johnston, Iowa 50131. For more details, see http://www.facebook.com/wibncia or http://www.wrestlersinbusiness.org/chapters/central-iowa/#sthash.Kwee78Tx.dpuf.

The Wrestlers In Business Network is a non-profit networking group with the objective of mobilizing the wrestling community for business, social and personal purposes.