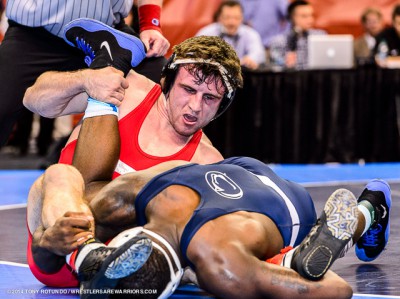 184 pound sophomore phenom Gabe Dean will be making his first appearance at the All-Star dual, and it will come against MAC opponent Jack Dechow, also a sophomore.

Dean burst on to the national scene when he scored an early season upset over Penn State’s Ed Ruth snapping a winning streak that was longer than 80 matches. Not only did Dean place 3rd in his first NCAA tournament, he also was a Junior World team member for the United States, beating out Iowan Sammy Brooks for the spot.

Dechow was a little different story as he put together a solid season, but really shined at the NCAA tournament where he started as the 13 seed, and came out with a 4th place finish, losing 5-4 to his All-Star opponent Dean.

Iowa’s Sammy Brooks, who put together a solid freshman campaign himself, could run into Dechow at the Midland tournament at the end of December. Using Wrestle Stat’s rankings that could set up a potential #2 – Dechow vs. #8 – Brooks showdown if the two meet.

According to Nic Ryder, Cody Caldwell could be the lucky Iowan, as he has an opportunity to face both of these wrestlers. UNI will head to New York to face Cornell at the Grapple at the Garden in December, after that Caldwell could face Dechow in conference dual action on February 20th when Old Dominion comes to Cedar Falls. From there the two could face off again at the MAC championships.

Iowa State’s Lelund Weatherspoon may get a chance to face Dean at the Southern Scuffle in early January.