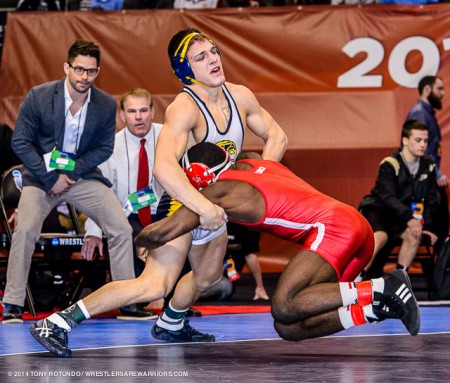 Two of college wrestling’s most explosive middleweights will be squaring off at 157, as Nebraska’s James Green will take on Kent State’s Ian Miller. The pair have only met on one occasion, and that was in the 3rd place match at last year’s NCAAs with Green winning a lopsided 13-1 major decision.

Green has always been dangerous; as he was one of the two wrestlers to hand Iowa’s Derek St. John a loss back in 2013 when St. John went on to win the 157 title.  Green’s NCAA resume is fairly impressive going 7th, 7th, and 3rd at the tournament, but his silver medal finish at the World University Championships showed us that Green may have a bright future once his college career wraps up after this season.

Miller quietly put together a solid season, winning the MAC championship with his only loss in conference competition a default to Central Michigan’s Luke Smith. After losing to Green at the NCAAs, Miller went on to have anything but a quiet summer. At Team USA’s World University Trials, he blew through competition a weight class higher than his college weight (74 KG/163 lbs) and wound up pinning Tyler Caldwell twice to claim the team spot (picking up the tournament’s outstanding honors in the process). Miller didn’t end up wrestling at the World Championships, but Caldwell went on to win USA a gold medal at the event. It’s one thing to get a fluke pin over an opponent, but to get two falls in the finals is a strong accomplishment.

Kent State will also be at the Southern Scuffle, so Miller may meet an Iowa State opponent there. Miller will also face UNI’s 157 this year for certain at the Kent State-UNI conference dual in February.