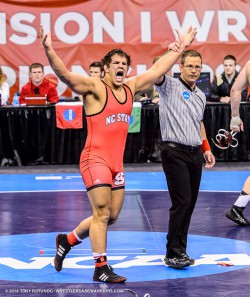 It looks like we will get a chance to see the returning NCAA champion at this weight, Nick Gwiazdowski of NC State, defend his title against Big Ten foe, Northwestern’s Mike McMullan. There have been two meetings between the pair, with McMullan taking the first match in 2012 5-3, and Gwiazdowski taking last year’s meeting 5-3. This will be McMullan’s third All-Star appearance.

Iowa’s Bobby Telford will not have an opportunity to meet Gwiazdowski (unless it’s at the NCAAs), but he is very familiar with McMullan. After splitting sudden victories as freshmen, the pair did not meet again until last year as juniors. Last year, McMullan took the series lead over Telford as he went 2-1 against the Iowa heavyweight, with the last win coming in the NCAA consolation finals. Neither Northern Iowa, nor Iowa State will face Northwestern in regular season action.

One takeaway an Iowa fan may notice is that with McMullan accepting an invitation, that leaves Mike Evans as the Hawkeye’s best shot at landing an All-Star participant.

Depending on their bracket, Cabell (UNI) and Smith (ISU) may end up facing the NCAA champ in Les Vegas at the Cliff-Keen tournament.