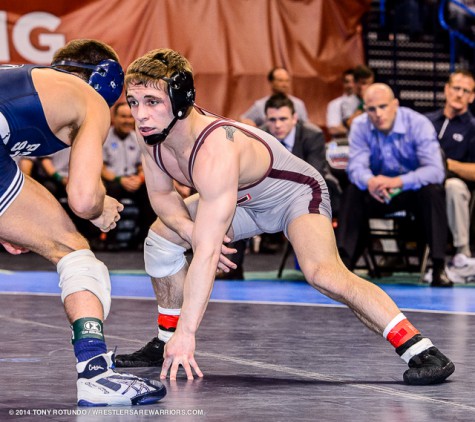 A few weeks ago we mentioned that Joey Dance tweeted that he would be in the All-Star match, and now we know who his opponent will be, NCAA runner-up Nahshon Garrett of Cornell. Garrett was last year’s NCAA runner-up and Dance was the fourth place finisher at this weight.

Garrett will be making his second appearance at the All-Star match, as he picked up a victory over Oklahoma’s Jarrod Patterson a year ago. Garrett only has two losses at the NCAA tournament, and both of them have been to eventual national champion Jesse Delgado.

Garrett also finished runner-up this summer for the USA World University team, behind Iowa’s Matt McDonough. Garrett originally won the tournament for the team spot at 57 KG, but McDonough earned the right to challenge Garrett as the highest placing wrestler at the World Team trials that was eligible.

We have spoken how Dance will travel to Iowa to face both UNI and Iowa State in dual action, and Garrett should also have a couple matches with Iowa wrestlers. UNI’s All-American Dylan Peters should get a crack at Nahshon Garrett at the Grapple at the Garden event near the end of December. Iowa State’s Kyle Larson will have an opportunity to meet Garrett at the prestigious Southern Scuffle tournament at the beginning of January.